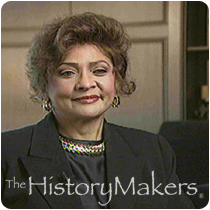 Favorite Color:
All Colors
Favorite Food:
Bread
Favorite Time of Year:
Winter
Favorite Vacation Spot:
Home
Favorite Quote:
If it is going to be, it is up to me.

Favorite Color:
All Colors
Favorite Food:
Bread
Favorite Time of Year:
Winter
Favorite Vacation Spot:
Home
Favorite Quote:
If it is going to be, it is up to me.

See how Janet Langhart Cohen is related to other HistoryMakers

Award winning journalist, Janet Leola Floyd Langhart Cohen was born on December 22, 1941, in Indianapolis, Indiana. She was raised by a single mother who worked as a domestic. She earned her high school diploma from Crispus Attucks High School in 1959, where she was a member of the band and debate team.

From 1960 until 1962, Cohen attended Butler University. In 1962, she was hired as an Ebony Fashion Fair Model and toured across the United States with the group. Four years later, she moved to Chicago to pursue her modeling career and was hired by WBBM-TV as a weekend weather girl. While living in Chicago, Cohen befriended singer Mahalia Jackson, Muhamad Ali and Dr.Martin Luther King, Jr. In 1972, she was hired by her hometown television station to host a new show, Indy Today with Janet Langhart.

The following year Cohen’s career soared when she was hired by the ABC affiliate in Boston to host Good Day in Boston. During her twenty-five year career, she has appeared on ABC, CBS, NBC and BET, and produced several programs, including On Capitol Hill with Janet Langhart. As an overseas correspondent, she covered news in Europe, Africa, the Middle East, and special assignments for Entertainment Tonight. Langhart also co-hosted America’s Black Forum with Julian Bond.

Shortly after the death of Dr. King, Cohen married her first husband, Tony Langhart, a Chicago police detective. In 1978, she married Dr. Robert Kistner, a physician and one of the developers of the birth control pill. In 1996, Cohen married former Secretary of Defense, William Cohen. During his tenure she created and hosted Special Assignment, a weekly television program that was broadcast globally over the Armed Forces Network from 1997-2001.

In 2004, Cohen authored a book of her memoirs entitled From Rage to Reason: My Life in Two Americas. She has also worked as a columnist for the Boston Herald and served as a spokeswoman for Avon Cosmetics and U.S. News and World Report. She has been a judge for the White House Fellows Program and advised the Miss America Organization.

See how Janet Langhart Cohen is related to other HistoryMakers
Click Here To Explore The Archive Today!