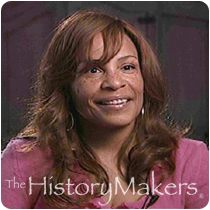 See how Janet Adderley is related to other HistoryMakers

Moving to New York City, Adderley married Nat Adderley, Jr., whom she met at Yale University, in 1979, and started a family. Involved in various entertainment classes and projects, Adderley landed the role of Belle in the Broadway production of the Andrew Lloyd Webber musical Starlight Express. In 1990, Adderley was featured in the play A...My Name is Alice and appeared in television commercials in America and Britain. In 1991, Adderley relocated to Hollywood where she appeared in regional theatrical productions. In 1994 and 1995, Adderley appeared in the television series Sweet Justice with Cicely Tyson; she also appeared in the 1999 movie Annie, and I Am Sam in 2001.

In 1994, Adderley started a performing arts class for her daughter and fourteen other children; as the word spread, The Adderley School for the Performing Arts in Pacific Palisades was formed. At The Adderley School, students were instructed in all of the elements of musical theatre by performing youth versions of Broadway shows.

See how Janet Adderley is related to other HistoryMakers
Click Here To Explore The Archive Today!