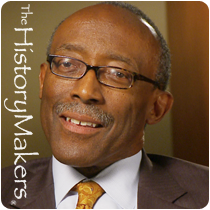 See how James Winston is related to other HistoryMakers

Communications attorney James L. Winston was born on August 24, 1947 to Corrie Conwill Winston and Jeff Winston in Pittsburgh, Pennsylvania. He has one other sibling, Frances Winston Adderley. Winston graduated from Belmar Elementary School in 1959 and enrolled at Westinghouse High School in Pittsburgh. After attending Westinghouse, Winston was admitted to the University of Pennsylvania in Philadelphia. He graduated with his B.S. degree in electrical engineering in 1969. Three years later, he received his J.D. degree in law from Harvard Law School in Cambridge, Massachusetts.

Upon graduation, Winston was hired as an attorney for the Roxbury Multi-Service Center in Boston. He then worked for the New York-based law firm LeBoeuf, Lamb, Leiby and MacRae as an attorney specializing in public utility law before serving as associate counsel for the Western Union Telegraph Company in Washington, D.C. In 1978, Winston worked as a legal assistant to Federal Communications Commissioner Robert F. Lee. After two years with the FCC, he was hired as an associate attorney by the Wolf, Block, Schorr and Solis-Cohen law firm, also in Washington, D.C. Winston then became a managing partner in the law firm of Rubin, Winston, Diercks, Harris & Cooke, LLP in 1981, specializing in telecommunications law. Additionally, he served as executive director and general counsel for the National Association of Black Owned Broadcasters, Inc. starting in 1982.

For nine years in a row, Winston was named one of the “Leading African Americans in Radio” by Radio Ink magazine. He was also inducted into the American Urban Radio Network Hall of Fame and presented the “Lifetime Leadership Achievement Award.” Winston was also inducted into the Minority Media and Telecommunications Council Hall of Fame and presented its “Lifetime Achievement Award.”

James L. Winston was interviewed by the The HistoryMakers on May 3, 2012.

See how James Winston is related to other HistoryMakers
Click Here To Explore The Archive Today!