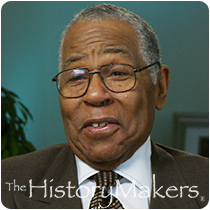 See how James Whitley is related to other HistoryMakers
Donate Now

Architect and business executive James M. Whitley was born on April 29, 1934 in Rochester, New York and raised in Warren and Cleveland, Ohio. Whitley’s father was a chemist; his mother an actress. He graduated from Kent State University in 1957 with his B.S. degree in architecture.

In 1963, Whitley founded Whitley/Whitley Architects and Planners LLC, a full service architectural and planning firm specializing in institutional design, sport facility design, and commercial housing design, where he has served as president and designer. He went on to expand the firm alongside his brother, William, and his sister, Joyce, and moved Whitley/Whitley Architects to Shaker Heights, Cleveland in 1969.

Whitley’s son, Kent, is a project manager and architect at Whitley/Whitley.

James Whitley was interviewed by The HistoryMakers on February 12, 2014.

See how James Whitley is related to other HistoryMakers
Donate Now
Click Here To Explore The Archive Today!