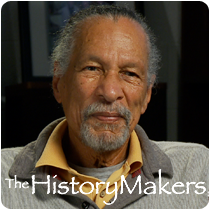 See how James West is related to other HistoryMakers

Electrical engineer James Edward West was born on February 10, 1931 in Farmville, Virginia to Samuel Edward and Matilda West. At various points, his father worked as a funeral home owner, an insurance salesman, and as a porter on the Baltimore and Ohio Railroad. His mother was a school teacher and worked at Langley Air Force Base during World War II, later losing her job because of her involvement in the National Association for the Advancement of Colored People. West has one brother, Nathaniel. West’s interest in electricity resulted from his work with his cousin to put electrical wiring into homes in rural Virginia when he was twelve years old. After graduating from George P. Phoenix High School, West went on to attend Hampton University in Virginia with plans of attending medical school. Nevertheless, West was drafted and sent to serve in the Korean War, where he was awarded a Purple Heart. West later became a pacifist and transferred to Temple University in Philadelphia. He decided to change his concentration and went on to receive his degree in physics in 1957.

West was hired at Bell Laboratories, where he began his studies to obtain his Ph.D. degree. During the second year of his doctorate program, West and a colleague, Gerhard Sessler, constructed a small microphone that did not require the use of a battery. This electret microphone replaced the carbon microphone and revolutionized communications technology. West’s invention was used in such devices as hearing aids and space technology. Even in 2011, 90% of microphone technology had its foundation in West’s development of the electret microphone. In addition to his research, West co-founded the Association of Black Laboratories Employees (ABLE) at Bell Labs in 1970. West retired from Lucent Technologies as a Bell Laboratories Fellow in 2001. He has continued to do research, joining the Whiting School of Engineering at Johns Hopkins University in 2002. His research interests include, among other things, finding new technology that will replace the electret microphone.

West’s inventions and contributions in electrical engineering have garnered him a great deal of recognition. In 1999, West was the fourth African American selected to join the National Inventors Hall of Fame for the invention of the electret microphone. He also received the U.S. National Medal of Technology in 2006. He has forty-seven U.S. patents, over 200 foreign patents, and has written over a hundred academic papers. West and his wife Marlene have four adult children, Melanie, Laurie, James and Ellington.

James E. West was interviewed by The HistoryMakers on September 10, 2012.

See how James West is related to other HistoryMakers
Click Here To Explore The Archive Today!