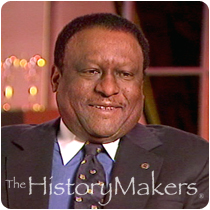 "Just trying to do God's will."

Civic leader James Compton was born on April 7, 1938, in Aurora, Illinois. After finishing high school, he went on to Morehouse College where he worked for the legendary educator Dr. Benjamin Mays, then president of the college. Mays inspired young Compton's interest in civil rights and equality and played a major role in Compton's decision to major in political science. While at Morehouse, Compton broadened his horizons by spending a summer in Soviet block countries and later, with the prestigious Merrill Fellowship, studying at the University of Grenoble in France. There, he received a diploma in French literature before graduating from Morehouse in 1961.

In 1978, Compton became President and CEO of the League's Board of Directors. Under his guidance, the Chicago Urban League was restructured to better provide direct care, advocacy, and research in the areas of community empowerment, education, employment, and social services. Compton has been especially active regarding the issues of education, employment, and voter registration, and with his leadership, the League in 1975, became the first non-governmental agency authorized by the Chicago Board of Election Commissioners to register voters. Additionally, Compton is recognized as an expert in the area of community empowerment. He is consistently called upon to speak on everything from racial profiling to the demise of public housing. Compton is also President and CEO of the Chicago Urban League Development Corporation, an independent, not-for-profit organization created in 1983 to engage in economic development activities.

Compton sits on several boards and committees including: Ariel Mutual Funds, ComEd, the Field Museum of Natural History and the Northwestern University Board of Community Associates. He has also been honored with numerous awards and an honorary doctorate degree.