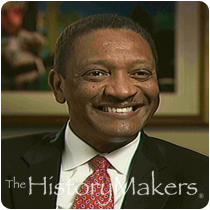 See how James Speed is related to other HistoryMakers

Corporate executive James H. Speed, Jr. was born on June 13, 1953 in Oxford, North Carolina. Speed’s father was a laborer in the town of Oxford, and his mother was a homemaker. In 1956, Speed’s mother suffered a stroke that left her paralyzed on the left side of her body. Still, she persevered and became a role-model to young James. Speed and his family lived in a mixed-income neighborhood, and he attended the segregated Orange Street Grade School where he excelled in math. Speed also distinguished himself as an athlete and had dreams of becoming a professional basketball player. In 1969, the Oxford Schools were integrated, and Speed attended J.F. Webb High School and was a member of the school’s integrated baseball team. Later that year, Speed participated in marches, protesting a racially charged murder in Oxford. In 1971, Speed graduated from J.F. Webb High School and entered North Carolina Central University.

Speed flourished as a basketball player and accounting student. He joined the National Association of Black Accountants and made the Dean’s List his senior year. Upon graduation, Speed accepted a job at Pittsburgh Plate & Glass as a staff auditor. In 1979, Speed earned his M.B.A. degree from Atlanta University and was named the "Most Outstanding Student" in the business program. After graduation, Speed joined the international accounting firm of Deloitte & Touche as a certified accountant where one of his principal clients was North Carolina Mutual. In 1991, Speed joined Hardee’s Food System as vice president and controller. Four years later, Speed was promoted to senior vice president, and, in 1997, he became a member of the company’s five-person senior management team. A short time later, Speed began work as a consultant for North Carolina Mutual. In 2000, he formed the Speed Financial Group but was recruited in 2003 to join North Carolina Mutual. He became president and CEO in 2004.

Speed lives in Raleigh with his wife and daughter. He serves on the Durham Chamber of Commerce.

Speed was interviewed by The HistoryMakers on June 25, 2007.

See how James Speed is related to other HistoryMakers
Click Here To Explore The Archive Today!