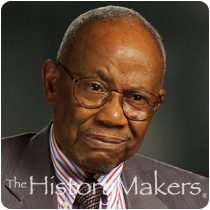 See how James Shoffner is related to other HistoryMakers

Organic chemist James Shoffner was born on January 14, 1928 and raised on a rural plantation in New Madrid, Missouri. Shoffner's segregated school was open only five months a year; the rest of the time was reserved for growing cotton. He transferred to a boarding school in Kansas City, Missouri where he was first introduced to chemistry and biology. However, Shoffner still had to help in the cotton fields and school for him did not begin until late November. He attended Lincoln University for a year before joining the United States Army, where he earned tuition benefits through the G.I. Bill. After completing his military service, Shoffner returned to college and received his B.S. degree in chemistry from Lincoln University in 1951.

Following graduation, Shoffner worked at the United States Post Office before returning to school and earning his M.S. degree in organic chemistry from DePaul University. Schoffner worked at a local paint company before being hired as a carbohydrate researcher at Corn Products International. After six years, Shoffner returned to graduate school to pursue his doctoral degree in organic chemistry at the University of Illinois, Chicago. After receiving his Ph.D. degree in 1965, Shoffner joined Universal Oil Products Company (UOP) where he would spend the next thirty-six years working in petroleum chemistry, specifically studying NMR spectroscopy and additives for plastics. Shoffner started a second career with the American Chemical Society (ACS) becoming active in the Division of Petroleum Chemistry. He held a series of positions in ACS' Chicago Section including serving as a board member and co-chair of Project SEED, a program to help disadvantaged students pursue a career in chemistry. He became a councilor of the ACS in 1974. In 1993, Shoffner retired from Universal Oil Products and joined Columbia College in Chicago as a science professor and science education consultant. In 2006, Shoffner organized the American Chemical Society conference honoring the famed chemist, Percy L. Julian. He was also instrumental in the development and served as a consultant for the 2007 PBS NOVA program, Forgotten Genius , about the life of Percy L. Julian.

James Shoffner has been active with the American Chemical Society for over forty years and received his thirty-year councilor plaque in 2005. Shoffner was awarded the ACS Award for Encouraging Disadvantaged Students into Careers in the Chemical Sciences and the Henry Hill Award. Shoffner lives in Elk Grove, Illinois.

James P. Shoffner was interviewed by The HistoryMakers on April 18, 2012.

See how James Shoffner is related to other HistoryMakers
Click Here To Explore The Archive Today!