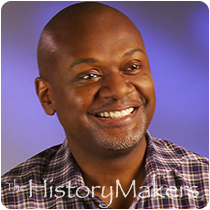 See how James Poyser is related to other HistoryMakers

Songwriter, producer and musician James Jason Poyser was born in Sheffield, England in 1967 to Jamaican parents Reverend Felix and Lilith Poyser. Poyser’s family moved to West Philadelphia, Pennsylvania when he was nine years old and he discovered his musical talents in the church. Poyser attended Philadelphia Public Schools and graduated from Temple University with his B.S. degree in finance.

Upon graduation, Poyser apprenticed with the songwriting/producing duo Kenny Gamble and Leon Huff. Poyser then established the Axis Music Group with his partners, Vikter Duplaix and Chauncey Childs. He became a founding member of the musical collective Soulquarians and went on to write and produce songs for various legendary and award-winning artists including Erykah Badu, Mariah Carey, John Legend, Lauryn Hill, Common, Anthony Hamilton, D'Angelo, The Roots, and Keyshia Cole. He was credited as writer/producer for multiple songs on Erykah Badu’s debut album, Baduizm; has writer, producer and musician credits on Lauryn Hill’s multiple Grammy-winning album, The Miseducation of Lauryn Hill; was a musician on Adele’s acclaimed album, 21; and served as executive co-producer and writer on Al Green’s Lay it Down. He was also the executive producer on Badu's highly celebrated albums, Mama's Gun and Worldwide Underground.

He is an active session musician and has contributed to the works of other artists such as Norah Jones, Eric Clapton, Joss Stone, Ziggy Marley, Macy Gray and Femi Kuti. In addition, Poyser has toured, and played live as a keyboardist with Jay-Z, The Roots, Erykah Badu, and Aretha Franklin, among others. He is a regular member of The Roots, and has joined them on stage as the houseband for NBC's Late Night with Jimmy Fallon, and subsequently The Tonight Show Starring Jimmy Fallon.

Poyser’s awards include a Grammy for Best R&B Song in 2003 for co-writing Erykah Badu and Common's hit “Love Of My Life.”

He resides in Philadelphia, Pennsylvania.

James Poyser was interviewed by The HistoryMakers on May 6, 2014.

See how James Poyser is related to other HistoryMakers
Click Here To Explore The Archive Today!