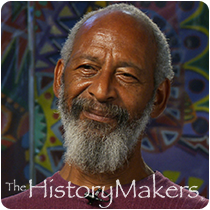 See how James Phillips is related to other HistoryMakers

Visual artist James Phillips was born in 1945 in Brooklyn, New York. Phillips attended the Fleisher Art Memorial School in Philadelphia in the 1960s. He then went on to study at the Philadelphia College of Art (University of the Arts for Philadelphia) from 1964 to 1965, followed by a brief affiliation with the Lee Cultural Center in 1968. Phillips then attended the Printing Trade School in New York City. From there, he became a member of the Harlem-founded Weusi Artist Collective, a group of young artists who made African iconic imagery and symbols a central part of their work, from 1969 to 1973.

In 1970, Phillips met the founding members of AfriCobra (African Commune of Bad Relevant Artists), a group that was committed to incorporating African aesthetics, iconography and positive political imagery into African American art. Phillips also became a member of AfriCobra. From 1973 to 1977, he served as an artist-in-residence at Howard University with duties as a mural consultant. Then, from 1977 to 1979, Phillips was affiliated with C.E.T.A., a nationwide arts initiative of the Carter Administration. After participating in the National Endowment for the Arts (NEA) Exchange Fellowship in Tokyo, Japan in 1980, he was appointed as a visiting lecturer at the University of California at Berkeley from 1983 to 1984. Phillips went on to teach courses at the Maryland Institute College of Art, and Hampton University. Phillips earned his M.F.A. degree from the Maryland Institute College of Art in 1998. In 2001, Phillips re-joined the faculty of the art department at Howard University as a lecturer, eventually becoming an associate professor of foundation and painting where he oversees all the graduate coursework.

As a painter, Phillips has participated in over seventy group and solo exhibitions in galleries and museums both nationally and internationally. His work is included in several well-known collections, including the Schomburg Center for Research in Black Culture Arts and Artifacts Collection of the New York City Public Library and Hampton University. Phillips’ works have also been specially created for public art projects for the city of Baltimore, Howard University, the Department of Parks in New York City, and the transit system for the City of San Francisco. In 1994, he was commissioned by the Philadelphia Airport to create a permanent piece of art for their domestic wing. The Art in Embassies program of the United States Department of State purchased two of Phillips’ paintings in 2006 for the American Embassy in Togo, West Africa. Phillips was also honored with the Creative Artists Public Service Award in 1971.

James Phillips was interviewed by The HistoryMakers on August 5, 2013.

See how James Phillips is related to other HistoryMakers
Click Here To Explore The Archive Today!