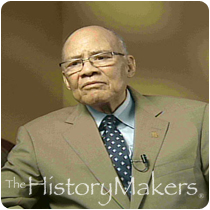 See how James Paschal is related to other HistoryMakers
Donate Now

Legendary Atlanta restaurateur James Paschal was born on October 8, 1920, in McDuffie County, Georgia, to Henry and Lizzie Paschal. Paschal started his first business, a shoeshine stand, at the age of thirteen, and at fifteen, he opened his first store; Paschal’s mother ran the business while he attended school during the day. The grocery store was such a success that the owners from whom Paschal rented the property reclaimed it, at which time he relocated the business and expanded it to include a meat market and entertainment center with a juke box. The new store was called James’ Place; it remained successful and stayed open for four years until he was drafted into the U.S. Army in 1941, the same year he graduated from McDuffie Training School.

In 1947, Paschal and his brother, Robert, opened a sandwich shop in Atlanta, Georgia, selling only sandwiches and sodas. The sandwich shop was so successful that they moved to a larger location on Martin Luther King Drive. In 1957, the Paschal Brothers opened Paschal’s Restaurant; the new facility included a full service restaurant, banquet rooms, a 120 room hotel, and a jazz club called La Carousel Lounge. Paschal’s Restaurant served as an important meeting place during the Civil Rights Movement; Dr. Martin Luther King, Jr. and his associates would hold strategy meetings there and families would reunite with relatives who had been arrested in protest marches. The Paschal Brothers also posted the bond for many of the protestors.

In 1978, the Paschals joined Dobbs House, Inc. in a joint venture to create Dobbs-Paschal Midfield Corporation; this food service company won the bid for a fifteen year contract at Atlanta Hartsfield Airport in 1980. After the contracted expired, the Paschals continued to provide food service at the airport, partnering with Concessions International, which was owned by Herman J. Russell.

In 1996, they sold the restaurant and hotel to Clark Atlanta University. In 2002, Paschal and Herman J. Russell opened a new Paschal’s Restaurant in the Castleberry Hills area of Atlanta, near the Georgia Dome. Paschal was awarded the Lifetime Achievement Award for Business; he was also inducted into the Atlanta Hospitality and Tourism Hall of Fame. Paschal’s story, as told to Mae A. Kendall, was presented in the autobiography Serving Up Hope and Freedom. Paschal passed away on November 28, 2008 at the age of 88.

See how James Paschal is related to other HistoryMakers
Donate Now
Click Here To Explore The Archive Today!