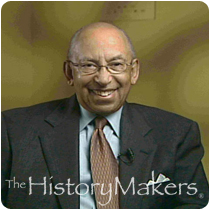 Favorite Color:
Blue
Favorite Food:
Fried Chicken, Bacon
Favorite Time of Year:
Christmas
Favorite Vacation Spot:
Hawaii, the Beach
Favorite Quote:
I Always Listen To Advice. It Is Needless To Refuse It. Besides The Giver May Be Nice And I Don't Have To Use It.

Favorite Color:
Blue
Favorite Food:
Fried Chicken, Bacon
Favorite Time of Year:
Christmas
Favorite Vacation Spot:
Hawaii, the Beach
Favorite Quote:
I Always Listen To Advice. It Is Needless To Refuse It. Besides The Giver May Be Nice And I Don't Have To Use It.

See how James O. Webb is related to other HistoryMakers
Donate Now

Former Glencoe, Illinois Mayor and insurance industry veteran James O. Webb, Jr. was born on November 25, 1931 in Cleveland, Ohio to Bessie Eubanks and James O. Webb, Sr. Webb attended Miles Standish, Empire and Glenville high schools in Cleveland, then graduated from Morehouse College in 1953 with his B.A. degree. He served two years active duty in the Korean War and spent six years as a member of the U.S. Army Reserve.

In 1954, Webb married Frankie L. Lowe in Atlanta, Georgia, where the couple lived across the street from Dr. Martin Luther King, Jr. Webb graduated from the University of Michigan in 1957 with a M.B.A. in actuarial science in 1957, the same year as the birth of his daughter, Pamela. In 1957, Webb worked as a Management Trainee Actuarial Assistant for Mutual of New York. Six years later, he joined Supreme Life Insurance, the first African American-owned and operated insurance company in the northern United States.

Webb moved to Illinois Blue Cross & Blue Shield in 1966 and held numerous positions. He began as an assistant actuary, and was promoted to Assistant VP-Product Development, where he helped to develop a new product line. Webb also designed the first Illinois HMO, as well as a national think tank for Blue Cross & Blue Shield executives called the Business Development Institute.

In 1967, Webb’s family moved to Glencoe, Illinois, a village in Cook County and became one of the few African American families to live in that area. Webb became treasurer for the American Academy of Actuaries in 1977, and in 1984, Webb joined the Dental Network of America, where he served as Chairman, President and CEO. There, he helped to guide the organization’s growth into the leading managed dental care company in the United States.

In 1993, after being encouraged to run for public office, Webb was elected mayor of Glencoe, Illinois, where he would remain for two full four-year terms. He successfully tripled the village’s tax income while overseeing certain land acquisition projects. Webb also helped enact ordinances for tree preservation and a teenage smoking ban. He left Dental Network of America in 1994 and became Director of Harris Bank, where he would remain until 2001. That same year, Webb retired from his position as Mayor of Glencoe and moved to North Carolina, where he lives with his daughter. In 2006, Webb became a member of the Durham, North Carolina Arts Council Board of Trustees.

Webb was interviewed by The HistoryMakers on February 12, 2007.

See how James O. Webb is related to other HistoryMakers
Donate Now
Click Here To Explore The Archive Today!