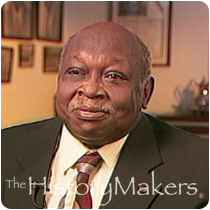 See how James N. Eaton, Sr. is related to other HistoryMakers
Donate Now

James N. Eaton, founder of the Black Archives Research Center, was born on September 14, 1930, in Richmond, Virginia. Eaton attended Fisk University, receiving his B.A. in 1952, and his M.A. in 1959. He received his L.H.D. from Florida Memorial College in 1997.

From 1953 until 1955, Eaton worked as an instructor of history at Miles College in Birmingham, Alabama. In 1957, he took a position as assistant principal at the Hanover School for Boys. In 1958, he left the Hanover School for an instructor's job at Florida A&M University in Tallahassee, Florida. While at Florida A&M, Eaton worked his way up from instructor to the chairman of the Department of History, Geography, and African American Studies. Eaton also worked simultaneously as an adjunct professor of History at Florida State University from 1970 until 1980. In 1975, Eaton founded the Black Archives Research Center and Museum. The museum, housed in the Carnegie Library on the campus of Florida A&M University, opened in 1977. Through the archives, Eaton works to collect, preserve, and display primary source information relating to the experiences and contributions of African Americans. The museums holdings include over 500,000 documents and hundreds of artifacts. Besides his position as curator of the Black Archives, Eaton is a prolific lecturer. He travels the country speaking on black culture and exhibiting historical materials.

Eaton is the founder and a charter member of Friends of the Black Archive, a charter member of the Florida History Advisory Board, and the recipient of the USDA Special Medallion for dedicated research on the 1890 land grant colleges. He was named Florida A&M Teacher of the Year twenty-five times from 1958-1996, and is the recipient of the CASE Professor of the Year Award. He and his wife, Leathea, have five children and lived in Tallahassee, Florida. Eaton passed away on October 26, 2004.

See how James N. Eaton, Sr. is related to other HistoryMakers
Donate Now
Click Here To Explore The Archive Today!