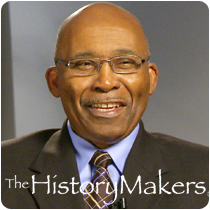 See how James Mitchell is related to other HistoryMakers

Research chemist James W. Mitchell was born on November 16, 1943 in Durham, North Carolina as the eldest and only son of tobacco factory workers. Mitchell’s interest in chemistry stemmed from the disciplines logical principles and their reliability. Mitchell received his B.S. degree in chemistry from North Carolina A & T State University in 1965, and his Ph.D. degree in chemistry from Iowa State University in 1970. His doctoral thesis focused on analytical chemistry, a branch of chemistry concerned with analyzing the characteristics and composition of matter.

Mitchell first joined AT & T Bell Laboratories in Murray Hill, New Jersey after receiving his doctorate. He chaired the Lab’s Affirmative Action Committee and was one of the founders of the Association of Black Laboratory Employees. In 1982, Mitchell was promoted to supervisor of the Inorganic Analytical Chemistry Research Group. Mitchell became head of the Analytical Chemistry Research Department in 1975. Under his leadership the department was transformed into an internationally renowned research organization. In 1985, Mitchell was named an AT & T Bell Laboratories Fellow, and, in 1989 he was extended membership into the National Academy of Engineering. He has written nearly 100 publications with as many citations attached to his work. He earned the 1999 Lifetime Achievement in Industry Award by the National Society of Black Engineers.

In 2002, Mitchell began his tenure at Howard University. He served as the David and Lucille Packard Professor of Materials Science, Director of the CREST Nanoscale Analytical Sciences Research and Education Center, Professor of Chemical Engineering, and Dean of the College of Engineering. Mitchell has also lectured internationally. In addition, he co-authored a book, Contamination Control in Trace Analysis, published more than seventy-five scientific papers, and invented instruments and processes. He also served as a member of the editorial advisory boards of Analytical Chemistry and Mikrochimica Acta. Mitchell and his wife Jean live in Washington, D.C. They have three children.

James W. Mitchell was interviewed by The HistoryMakers on September 11, 2012.

See how James Mitchell is related to other HistoryMakers
Click Here To Explore The Archive Today!