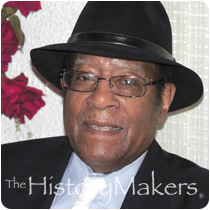 See how James McQuay is related to other HistoryMakers

Furrier James McQuay was born on November 15, 1924 in Baltimore, Maryland to Sarah and Thomas McQuay. Shortly after birth, McQuay and his family moved to Yonkers, New York. He grew up in a small black community on the second floor of a three-family housing unit. Heavily influenced by his mother and grandmother, they provided him with examples of hard-work and determination. He attended Hawthorne Junior High School and graduated in 1943 from Yonkers High School. Prior to graduation, McQuay began working for Nathan Ginsburg in 1939, a local Yonkers furrier. McQuay and Ginsburg cultivated a friendship that lasted generations. It was through Ginsburg that McQuay realized that he had a dream to own a fur shop.

Immediately after graduating from Yonkers High School, McQuay was drafted into World War II, where he served in the South Pacific until 1946. Upon McQuay’s return, he went back to school working for Nathan Ginsburg, before venturing out on his own four years later. In 1950, McQuay opened his first shop in 1950, Furs by James. He became one of, if not the only, African American furriers in New York City. The store remained open for six years before McQuay closed it in 1956 to open another store of the same name in Mt. Vernon, New York. Furs by James stayed open for seven years, until he closed it in 1963 to pursue freelance opportunities. By the early 1970s, McQuay’s furs could be seen in many blaxploitation films of the time, including Cleopatra Jones and Foxy Brown. In the early 1980s, McQuay participated in the Congressional Black Caucus’ annual fashion show as the only furrier.

Throughout his career, McQuay has received numerous accolades for his achievements, including being featured in Essence magazine and in the Alpha Kappa Alpha Sorority, Inc.’s “Furs, the Final Touch” fashion show.

James McQuay was interviewed by The HistoryMakers on September 21, 2007.

See how James McQuay is related to other HistoryMakers
Click Here To Explore The Archive Today!