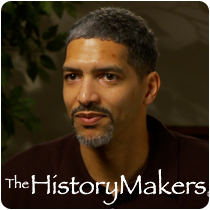 See how James McLurkin is related to other HistoryMakers
Donate Now

Robotics engineer James McLurkin was born in 1972 in Baldwin, New York. His mother was a speech therapist on Long Island; and, his father, a business manager for AT&T. In 1988, McLurkin built his first robot, Rover, and quickly followed it with many other designs such as LEGO bricks. He also programed self-designed video games. Following graduation from Baldwin High School, McLurkin enrolled at Massachusetts Institute of Technology where he received his B.S. degree in electrical engineering with a minor in mechanical engineering in 1995. McLurkin continued his studies at the University of California, Berkeley, and graduated in 1999 with his M.S. in electrical engineering. He returned to MIT and went on to receive his M.S. degree in computer science in 2003, and his Ph.D. in computer science in 2008.

McLurkin worked as an intern at General Motors Advanced Technology Group in 1994, and remained there until he entered graduate school. From 1995 to 1997, he was assigned as research assistant to Dr. Rodney Brooks at the MIT Computer Science and Artificial Intelligence Laboratory. There, McLurkin designed the “Robotic Ants” robots for his undergraduate thesis. He then began consulting in 1998, and worked on projects with Walt Disney Imagineering and iRobot Corporation. McLurkin created the “SwarmBots” robots during his five-year tenure as lead research scientist at iRobo. In 2009, McLurkin was appointed assistant professor at Rice University. Using nature as a model, McLurkin’s core research has centered around developing distributed algorithms for multi-robot systems – the software for large swarms of autonomous robots. McLurkin’s research articles have been published in academic journals such as International Foundation for Autonomous Agents and Multiagent Systems, International Symposium on Experimental Robotics and IEEE Transactions on Education.

Since 1995, McLurkin has has been asked to speak at Smithsonian Museum, Harvard University, Infosys, IBM, and Honda. In 2002, Mclurkin was featured in the Lemelson Center’s traveling exhibit, “Invention at Play",” and was awarded the 2003 Lemelson MIT Student Prize. He was recognized by Time magazine as one of America’s top-five engineers in the “Rise of the Machines” feature, and by Black Enterprise magazine as the Best and Brightest Under 40.”

James McLurkin was interviewed by The HistoryMakers on February 3, 2013

See how James McLurkin is related to other HistoryMakers
Donate Now
Click Here To Explore The Archive Today!