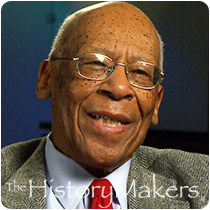 See how James M. Harkless is related to other HistoryMakers

Labor lawyer James M. Harkless was born on April 19, 1931 in Detroit, Michigan. He attended Harvard University, where he received his A.B. degree in history in 1952. While there, he was the first African American to be elected president of the Harvard Glee Club. Harkless went on to attend Harvard Law School and earned his J.D. degree in 1955.

Upon graduation, Harkless clerked for a justice of the Massachusetts Supreme Judicial Court and was appointed chief clerk in 1956. From 1957 to 1960, he worked as an associate in a Boston area law firm, where he represented unions in labor relations. In 1961, Harkless served as general counsel for a sub-committee of the U.S. House Education and Labor Committee. Then, from 1962 to 1964, he became the first African American appellate court attorney in the Office of the National Labor Relations Board General Counsel. Harkless went on to work as confidential assistant to the Commissioner of Customs, as executive secretary of the U.S. Office of Economic Opportunity, and as senior associate and vice president of a Washington, D.C. consulting firm. In 1970, Harkless was hired as an arbitrator and associate umpire for Bethlehem Steel Company and United Steelworkers of America. He then received arbitration cases through the Federal Mediation and Conciliation Service, the American Arbitration Association, and the National Mediation Board, as well as selections as permanent arbitrator for private companies, federal agencies, and their unions. Harkless has issued more than 3,000 decisions covering most labor-management issues.

Harkless has served in many other organizations, often as a board member. In 1972, the United States President appointed Harkless to serve on the Special Railroad Emergency Boards. He then worked as part-time chairman of the Washington, D.C. Board of Labor Relations from 1974 until 1978. Harkless also served as a member of the Prince George's County, Maryland Public Employee Relations Board from 1975 to 1978 and as a member of the Employee Relations Council of the Metropolitan Washington Airports Authority from 1993 to 1995. From 1985 to 2006, he was chairman of the IUE-GM (Delphi) Legal Services Plan. Harkless was appointed a member of the Foreign Service Grievance Board in 1990, served as a consultant on arbitration to a South African government commission in 1998, and was elected the first African American President of the National Academy of Arbitrators in 1998. In 2005, the College of Labor and Employment Lawyers made him an honorary fellow.

See how James M. Harkless is related to other HistoryMakers