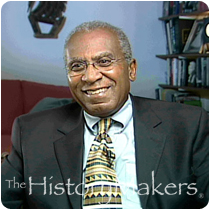 See how James Lowell Gibbs, Jr. is related to other HistoryMakers

Cultural anthropologist James Lowell Gibbs, Jr., was born on June 13, 1931, in Syracuse, New York to Huldah Hortense Dabney, a school teacher, and James Lowell Gibbs, Sr., executive director of a community center. Gibbs was born prematurely when his mother’s appendix burst during the seventh month of her pregnancy. Gibbs can trace his family ancestry back to 1834 to a paternal great-great grandfather who was born in Florence, South Carolina. Gibbs grew up in Ithaca, New York, where he attended Henry St. John’s School. He skipped the second grade and later attended Boynton Junior High School and Ithaca High School. Gibbs initially wanted to be a commercial artist but changed his mind when he read a book by Paul Robeson’s wife, Eslanda Goode Robeson, called African Journey that showcased Robeson’s field work as a cultural anthropologist in Uganda. Gibbs realized that he wanted to be a social scientist.

Gibbs graduated from Cornell University in 1952 and served as senior class president. Gibbs went on to graduate school at Harvard University and earned his M.A. degree and Ph.D. degree in cultural anthropology. While pursuing his degree at Harvard, Gibbs served as a teaching fellow and resident tutor, the first African American resident tutor in the history of Harvard University. In 1959, Gibbs went on to teach at the University of Minnesota. He remained at the University of Minnesota until 1966. In 1965, Gibbs edited and contributed to the book, Peoples of Africa. In 1966, Gibbs joined the staff at Stanford University as associate professor of anthropology. For three different periods, Gibbs went to Africa and conducted field research on the Kpelle of Liberia. In 1970, Gibbs co-directed and co-produced the documentary film, The Cows of Dolo Ken Paye, which displays the Kpelle people’s methods of conflict resolution. That same year, Gibbs became Stanford University’s first dean of undergraduate studies. He remained in this position until 1976 but continued to serve as a professor of anthropology. In 1983, Gibbs co-authored Law in Radically Different Cultures, a study of law in Botswana, Egypt, the Peoples Republic of China, and the United States. In 1984, he became a senior fellow at the W.E.B. DuBois Institute for Afro-American Research at Harvard University. Gibbs returned to Stanford and served as the codirector of the Stanford/Berkeley Joint Center for African Studies between 1985 and 1987. Between 1987 and 1990, Gibbs served as Stanford University’s chairman of the Department of Anthropology.

Gibbs was the Martin Luther King, Jr., Centennial Professor of Anthropology, Emeritus at Stanford University. He is married to Jewelle Taylor Gibbs.

See how James Lowell Gibbs, Jr. is related to other HistoryMakers
Click Here To Explore The Archive Today!