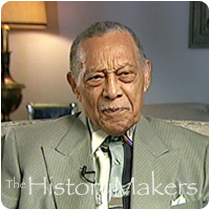 See how James Lee is related to other HistoryMakers

Retired Chicago public school teacher and veteran World War II Naval aircraft maintenance instructor, James Oscar Lee was born April 1, 1912 in Philadelphia, Pennsylvania. With family roots in rural Gloucester, Virginia, Lee grew up amid the row houses of North Philadelphia. He graduated from Central High School in 1930 with a B.S. in industrial arts. Central High, founded in 1836 and the second oldest high school in America, was at one time authorized to grant baccalaureate degrees. He went on to attend traditionally black, Cheyney State Teachers College in Cheyney, Pennsylvania, graduating with another B.S. degree in industrial arts in 1934. Lee also attended the University of Pennsylvania.

A caterer in 1938, his teaching career began at James Adams Senior High School in Coatesville, Pennsylvania, where he taught from 1939 to 1942. At the onset of World War II, Lee served at the Naval Air Technical Training Center in Chicago, Illinois. At this facility, which is now Chicago Vocational High School, Lee taught aviation engine mechanics exclusively to white soldiers. Black soldiers were not chosen to learn aviation engine maintenance. Later, in the South, Lee was not allowed to teach whites who needed to know aircraft maintenance because he was black. These restrictions rendered him idle for long periods of time. In order to work and travel, Lee became a chief carpenter’s mate.

In 1948, the Chicago Board of Education’s new Dunbar Trade School employed Lee. Unfortunately for black students, Dunbar’s status as a “trade” school was soon changed to “vocational” school. This change meant a loss of true union apprenticeship programs and the guaranteed jobs that followed. Lee was also a pioneer homeowner in Chicago’s Park Manor neighborhood. Facing threats of violence, Lee and his family endured and lived in the home for over fifty years. After fifty-one years of teaching and numerous citations for superior performance at Dunbar, Lee retired as teacher emeritus in 1997.

See how James Lee is related to other HistoryMakers
Click Here To Explore The Archive Today!