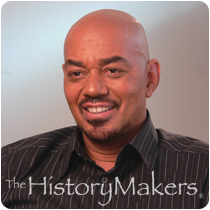 See how James Ingram is related to other HistoryMakers

R&B vocalist James Ingram was born on February 16, 1952, in Akron, Ohio to Alistine and Henry Ingram. Ingram was interested in music at an early age and became a self-taught musician, inspired by his musical idol, jazz organist Jimmy Smith. In the 1970s, Ingram began performing in the Akron band Revelation Funk under leader John Birkett and alongside Bernard Lawson, Sr. The group opened for the Ohio Players and performed with a variety of other Akron funk bands, including Axis and the Silky Vincent Group.

In 1973, when Ingram was seventeen years old, the group traveled to Los Angeles, California, hoping to find further opportunities to perform. Although the group met with some success, recording the track “Time is on Our Side” for the soundtrack to the film Dolemite, the band was unable to sustain itself, and the group returned to Ohio. Ingram stayed behind, playing music around Los Angeles and eventually performing backup vocals and playing keyboards for Ray Charles. Ingram’s career as a musician began to take off, and in the mid-1970s, he began working as soul artist Leon Haywood’s musical director.

In the late 1970s, Ingram had a reputation for his work as a studio session vocalist in Los Angeles, and soon grabbed the ear of legendary ex-Motown songwriter Lamont Dozier. Dozier offered Ingram the opportunity to contribute vocals and material for some of his releases, and Ingram’s “Love’s Calling” gained some airplay. Another musical legend, composer and musical director, Quincy Jones, heard a demo of Ingram performing a track entitled “Just Once,” and quickly offered the singer the opportunity to perform on his 1980 album The Dude. “Just Once,” re-recorded with Quincy Jones, became Ingram’s first massive hit, winning Ingram Grammy Awards for Best Male Pop Vocal and Best R&B Vocal, as well as a nomination for Best New Artist.

Ingram signed to Quincy Jones’s Qwest Records and recorded his own solo material with production work from Jones, and, in 1982, released his first solo single, “One Hundred Ways.” The song reached #14 on the U.S. charts. After co-writing Michael Jackson’s hit “P.Y.T.,” Ingram released his debut album It’s Your Night in 1983, selling 850,000 copies and working with such musical artists as Ray Charles, Michael McDonald, Patti Austin, Anita Baker, Nancy Wilson and Kenny Rogers. Ingram joined another large group of popular artists in performing on the 1985 record “We are the World,” the same year as he was awarded a Grammy Award for his Michael McDonald duet “Yah Mo B There.”

In 1986, Ingram’s second album Never Felt So Good was released alongside the singles “Always” and “Never Felt So Good.” He joined singer Linda Ronstadt for 1987’s gold-selling hit “Somewhere Out There,” and released his third album, entitled It’s Real, on Warner Brothers in 1989. The album featured the hit title track, written by legendary songwriter Thom Bell.

In 1990, Ingram appeared on Quincy Jones’ R&B mega-ballad “The Secret Garden,” and one year later released his own greatest hits disc entitled The Power of Music. In 1993, Ingram released his fourth LP, Always You and continued writing and performing individual singles throughout the 1990s. In 1999, Ingram released Forever More: The Best of James Ingram, and in 2006, participated in Celebrity Duets, a reality television program.

Ingram continues to perform annually on the “Colors of Christmas” Tour and regularly tours throughout southeast Asia, where he is one of the most popular U.S. artists to this day.

See how James Ingram is related to other HistoryMakers
Click Here To Explore The Archive Today!