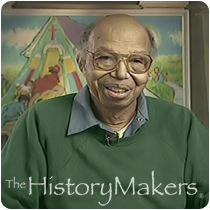 See how James Hiram Malone is related to other HistoryMakers

Versatile, prolific, retired graphic artist, cartoonist, writer and painter, James Hiram Malone is the founder and director of Laughing Trees, Inc., a non-profit, volunteer oriented organization operated out of his office, studio, and gallery/home in Atlanta, Georgia. Born on March 24, 1930 at the onset of the depression in Winterville, Georgia to Ralph and Sarah Lena Echols Malone, his father (Malone Sr.) in 1932, moved the family to Atlanta’s Buttermilk Bottom with hopes of attaining a better life for Malone and his older brother, Ralph, Jr. With encouragement from his mother and an elementary school teacher, Malone began to express himself visually at an early age. The earliest exhibition occurred during his junior year in high school. During his senior year, his paintings won him international recognition and a scholarship to attend Morehouse College where he majored in art.

Malone tried to attend “White” Atlanta’s High School of Art but was denied admission. Instead, he joined the U.S. Army, and his military career spanned over a nine-year period. Malone became the first person of color to hold the Fort Jackson post of Art Coordinator NCO and an instructor of the 3431 Army Services Unit Craft Shop. Later, he became the U.S. Army Chief Illustrator in the Special Services Division.

Malone left the military and demanded entrance again into Atlanta’s High School art program. Barred the second time, Atlanta’s High School offered him a voucher to attend an art school up north. At Detroit’s Center for Creative Studies Art and Design College, he earned his Associate of Arts degree. He worked for a variety of companies— always the first and only black in the art department. His employment ranged from a one room small agency’s one-man team to an over four acre K-Mart International Headquarters with a team of hundreds. Before leaving Michigan, for Atlanta, he spearheaded fundraising for the landmark African American History Museum; recorded the 1967 riots in paintings, cartoons and writings; created Michigan Chronicle Newspaper’s cartoon, “Brother,” and “I’m Dreaming of Colored Christmas” greeting cards.

Among the books Malone has authored are Brother, No Job Dad and Grandma Sarah’s Closet. His publications include the Ralph Syndicated Comic Strip and the Living Longer Comic Strip. He has written lyrics for the songs, “Homeless Hope” and “Willie Lives in the Street” to bring attention to the plight of the homeless and “Talk to Your Child” to encourage parents’ participation in the lives of their children. His poetry is in the book Word Up. Two of his paintings Faith Moves Mountains and Down Yonder serve as a background for the movie Snow Dogs. His cartoons are published in numerous publications.

Malone is an avid community activist, lobbyist, volunteer for Hosea’s Feed the Hungry and Homeless Program and a columnist for the crusading newspaper, Street Beat. He is CEO of Grove Park Arts Alliance and Neighborhood Association; Board Member of Keep Atlanta Beautiful; past President of the International Black Writers Association; Local 22, Member of the Southern Poverty Law Center of Alabama and the RepoHistory Association; the Buttermilk Bottom Project; past chairman, The Atlanta Project Clusters, promoting local neighborhood’s self reliance.

Malone was divorced and was the father of two sons, Andrew Ralph and Matthew Martin, who reside in Michigan. He passed away on April 9, 2011 in Atlanta.

See how James Hiram Malone is related to other HistoryMakers
Click Here To Explore The Archive Today!