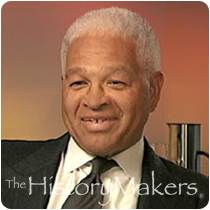 See how James H. Lowry is related to other HistoryMakers
Donate Now

Management consultant and entrepreneur James H. Lowry was born in 1939 to Chicago postal workers Camille and William Lowry. Lowry graduated from the Francis W. Parker School in Chicago, and went on to earn his undergraduate degree from Grinnell College in Iowa. Lowry served in the Peace Corps in Tanzania and Puerto Rico before he returned to school to earn his master's degree in public international affairs from the University of Pittsburgh. In 1968, Lowry became McKinsey Consulting's first African American recruit.

At McKinsey, Lowry convinced corporate clients of the value of investing in minority communities and sought to increase the firm's number of African American consultants; he continued this work while attending Harvard Business School, where he served as class president in 1973. On assignment from former Commerce Secretary Juanita Morris Kreps, Lowry produced a report on the status of minorities in the twenty-first century that attracted the attention of numerous municipal and corporate clients, including PepsiCo and Ford. In 1975, Lowry used his knowledge and experience to found James H. Lowry & Associates. Lowry's strategic partnership with Ford led to the automotive giant sourcing more than $3 billion dollars of goods and services to more than 300 minority suppliers. In 1981, Lowry approached his former employer, McKinsey, about its disappointing number of African American consultants, which he helped increase to nearly one hundred by 1999.

In 2000 Lowry was recruited to join the prominent Boston Consulting Group; as a president of the group's Chicago operations, he was credited for his productive involvement in the North American Black Diversity Initiative, a program that fosters the development of African American management consultant professionals on college campuses and within the company. An adjunct faculty member of Northwestern University's Kellogg School of Management, Lowry developed a lauded education program for minority business professionals in 2002. Lowry and his wife, Doris, raised a daughter: Aisha.

See how James H. Lowry is related to other HistoryMakers
Donate Now
Click Here To Explore The Archive Today!