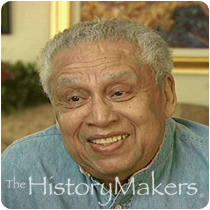 See how James H. Gilliam, Sr. is related to other HistoryMakers

Director of New Castle County, Delaware’s Department of Community Development and Housing, James H. Gilliam, Sr., was born on August 6, 1920, in Baltimore, Maryland. After receiving his diploma in 1938 from Frederick Douglass High School, he attended and graduated from Morgan State University with his B.A. degree in sociology in 1948, and also earned his M.S.W. degree from Howard University's School of Social Work in 1950. He was a captain in the U.S. Army during the Korean War and won a Bronze Star for his admirable service.

From 1974 to 1990, Gilliam served as president and chairman of the board of Delaware's Community Housing Incorporated and as a consultant on a wide range of community development issues. He was the founder and the first executive director of the Greater Wilmington Housing Corporation. He retired in 1990 as director of New Castle County's Department of Community Development and Housing.

Gilliam also served as spokesperson for the Delaware Cancer Society. He was a member of the Delaware Advisory Committee for the U.S. Commission of Civil Rights, the Judicial Evaluation Committee for the Family Court of Delaware, the Supreme Court of Delaware's Professional Responsibility Committee, and the Magistrate's Steering Committee. He assisted the chief judge of the Family Court in converting the Court into a single statewide operation.

Gilliam's other civic duties included a two-term presidency of the National Association of Non-Profit Housing Organizations; service as a trustee of the National Urban League and Wesley College; and as a director of the National Tuberculosis Association. He was the founder of the Metro-Wilmington Urban League. Gilliam was also a member of the board of governors of the United Way of Delaware and served on the board of the Medical Center of Delaware. Currently, he serves as chairman of New Castle County, Delaware’s Diversity Commission.

The Liberty Bell Award was presented to Gilliam in 1997 in recognition of his service as a non-lawyer in strengthening the American system of freedom under the law. He was named Distinguished Delawarean in 1982, and awarded the Order of the First State that same year. Gilliam won the J. Caleb Boggs Community Service Award in 1990 and was awarded the Josiah Marvel Cup in 1994. The National Conference honored him for Community and Justice in 1999. He is also the recipient of honorary doctorate degrees from Goldey-Beacom College, the University of Delaware, and Delaware State University.

See how James H. Gilliam, Sr. is related to other HistoryMakers
Click Here To Explore The Archive Today!