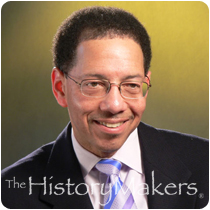 See how James H. DeGraffenreidt, Jr. is related to other HistoryMakers
Donate Now

Chairman and Chief Executive Officer (CEO) of WGL Holdings, Inc. (WGL) and Washington Gas Light, James Henry DeGraffenreidt, Jr. was born on May 8, 1953 in Brooklyn, New York. As an adolescent growing up in New York City, DeGraffenreidt helped his father, an accountant, prepare federal tax returns for his clients. He attended the Brooklyn Preparatory School in Crown Heights where he played on the championship basketball team. DeGraffenreidt went on to attend Yale University where he pursued his B.A. degree in American Studies. After finishing his undergraduate education, in 1974, DeGraffenreidt attended Columbia University where he graduated with his J.D. degree and his M.B.A. in 1978.

After working as a beat reporter for the Associated Press, DeGraffenreidt practiced law at various private law firms including McKenna, Wilkinson and Kittner and Hart Carroll and Chavers. He specialized in telecommunications, public utilities and public finance. Between stints at these law firms, DeGraffenreidt served as Assistant People’s Counsel representing residential and non-commercial utility consumers in Maryland in major federal and state regulatory matters. In 1986, he was hired as the senior managing attorney for the Washington Gas. Five years later, in 1991, DeGraffenreidt was elected as the Vice President of Rates and Regulatory Affairs and was responsible for handling rate cases and other regulatory matters before the commissions that control the Washington Gas’ service territories. In addition, he also oversaw the company’s operating divisions in the District of Columbia, Maryland and Virginia.

DeGraffenreidt became the president and chief operating officer of Washington Gas in 1994 and later became the company’s CEO in 1998. He has served on the boards of the Harbor Bankshares Corporation, Mass Mutual Financial Group, the American Gas Association and the Alliance to Save Energy. In 2007, DeGraffenreidt was elected to serve as chairman of the American Gas Association’s board of directors. During 2005 and 2006, he served as Industry Co-Chairman of the Alliance to Save Energy.

DeGraffenreidt lives in Baltimore, Maryland with his wife and four children.

DeGraffenreidt was interviewed by The HistoryMakers on January 31, 2008.

See how James H. DeGraffenreidt, Jr. is related to other HistoryMakers
Donate Now