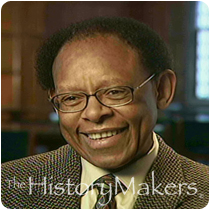 See how James H. Cone is related to other HistoryMakers
Donate Now

Theologian James Hal Cone was born on August 5, 1938 in Fordyce, Arkansas. With his parents’ teachings on faith and his strong understanding of the value of an education, Cone began his formal training with a diploma from Ouachita County Training High School in 1954. That same year, he received his call to the ministry and became a pastor at age sixteen. After receiving his B.A. degree from Philander Smith College in Little Rock, Arkansas in 1958, he attended Garrett Theological Seminary in Evanston, Illinois where he received his B.D. degree in 1961. Continuing his studies, Cone received both his M.A. degree in 1963 and his Ph.D. in systematic theology in 1965 from Northwestern University.

Armed with a strong divinity education and serving as an ordained minister in the African Methodist Episcopal Church, Cone began his professional career as a professor at Philander Smith College, in 1966. He then taught at Adrian College in Michigan. Beginning in 1970, Cone joined the faculty of Union Theological Seminary in New York, where in 1977, he was awarded the distinguished Charles A. Briggs Chair in Systematic Theology. Cone also created a systematic Black theology. Cone created a Christian theology that was based on African American experience, history, and culture.

See how James H. Cone is related to other HistoryMakers
Donate Now
Click Here To Explore The Archive Today!