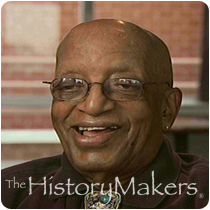 James Edward Guilford, Jr. was a master barber, hair stylist and entrepreneur, who started cutting hair at the age of twelve. He was a living legend in the lower Roxbury neighborhood in Boston, Massachusetts where he maintained an art studio, continuing his love for painting. He also played golf.

Guilford was born at home in Boston, Massachusetts on October 7, 1911. His mother, Nancy (Haskins) Guilford migrated from Lynchburg, Virginia and his father, James, from Petersburg, Virginia around 1910. He attended Boston public schools and completed his studies at the prestigious Boston Latin School in 1928. He was the only African American on the thirty-two-member track team at the Latin School in 1926. Later, he studied at Northeastern University School of Law, Wilfred’s Academy of Beauty Culture, and the Lee Institute of Real Estate. Throughout his teenage years, Guilford worked in barbershops after school and during the summers. He was the youngest of three siblings and his earnings as a junior barber helped his family through the Depression. He opened and managed his own shop - Dunbar Barbers from 1934 to 1942.

As a barber from 1923 until 1979, with three years in the military fighting in the Pacific during World War II and as the proprietor after the war of Jimmy Guilford’s Men’s Hairstyling Salon on Tremont Street, Guilford catered to all classes and especially to Boston’s black elite. His customers included Sarah Vaughan, Count Basie, Louis Armstrong, Nat King Cole, Duke Ellington, Jackie Robinson, Oscar Peterson, Sugar Ray Robinson and Jack Johnson.

From 1962 to 1963, Guilford was the President of the Associated Master Barbers of Massachusetts, which included white and black barbers. He was the first African American elected to this position.

As a professional artist, Guilford also received recognition. He exhibited widely and was a founding member and a president of the Boston Afro-American Artists, Inc. He was a member of the Piano Craft Guild Artists’ Association, where he maintained a studio. Many of his drawings, oils and watercolors are in private collections. His oil painting of Martin Luther King, Jr. hangs in the Martin Luther King, Jr. Library in Cambridge, Massachusetts. Guilford was among the leading 20th century black artists in Boston whose creative works have educated and contributed to the arts culture of the city.