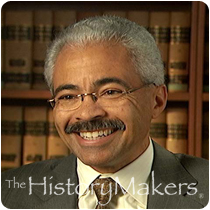 See how James G. Potter is related to other HistoryMakers

Corporate attorney James G. Potter was born August 1, 1957 in Muncie, Indiana. Orphaned with three brothers and a sister when his parents passed away, Potter was raised in Richmond, Indiana by librarian Maxine Embry. He attended Vaile Elementary School, Hibbard Junior High School and graduated from Richmond High School in 1975 as the top male student. Majoring in philosophy and behavioral science, Potter worked as a dialysis technician and graduated from the University of Chicago in 1978. In 1982, Potter graduated from Harvard Law School.

Potter worked for the firm of Keck, Mahin and Cate of Chicago in the corporate and securities area. His clients included Morgan, Lewis and Bockius of Philadelphia. From 1989 to 1997, Potter served as chief legal officer of Prudential Direct, a business unit of Prudential Insurance that included Prudential Bank and Trust Company. In this capacity, he provided direct support in the areas of banking, corporate, finance and securities law, and managed the law departments of the Prudential subsidiaries that make up the business unit. Potter served as executive vice president, general counsel and secretary of Provident Mutual Life Insurance Company, which comprises the fifth largest share of the variable life insurance market in the United States. At Provident, Potter managed the law, compliance, and corporate secretary departments. Joining Del Monte Foods Company in 2001, Potter was appointed general counsel and secretary for the food and pet products giant. He is now the company’s senior vice president and corporation counsel.

Concerned about diversity in the workplace, in 1999, Potter joined the legal counsels of 500 major U.S. corporations in signing a document entitled, “Diversity in the Workplace, A Call to Action”. He is a member of the American Bar Association, the Minority Corporation Counsels and the Coalition to Promote Minority Health. He is also chairman of the steering committee of the California Minority Counsel Program.

Potter, the father of a son, Jameson, and daughter, Lauren, lives and works in San Francisco, California.

See how James G. Potter is related to other HistoryMakers
Click Here To Explore The Archive Today!