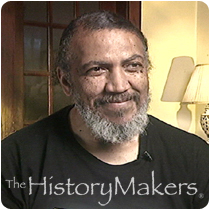 See how James Earl Reid is related to other HistoryMakers

Renowned sculptor James Earl Reid was born at Stump Hope Farm in Princeton, North Carolina, on September 9, 1942. In 1970, Reid was awarded his master’s degree in sculpture from the University of Maryland College Park.

While attending the University of Maryland, Reid worked as a graduate teaching assistant, and remained there after earning his M.A. degree, rising to become an assistant professor over the next eleven years. In 1979, Reid received his first major commission for a work of art when the City of Baltimore asked him to create a sculpture of jazz legend Billie Holiday, who spent her childhood there; the sculpture was unveiled in 1985 in the Druid Hill section of Baltimore.

The same year as the as the Billie Holiday sculpture's unveiling, Reid found himself in the center of a controversy that would take him to the United States Supreme Court. Commissioned by the Community for Creative Non-Violence (CCNV), Reid had been asked to create a sculpture for a Washington, D.C., Christmas pageant; his submission, Third World America: A Contemporary Nativity, featured a homeless family holding a newborn child over a steam vent, and featured the words “And still there is no room at the inn,” on the base. The struggle with the piece began early, when initially the National Park Service refused to put the piece on display. The bigger issue, however, arose with the CCNV, when both they and Reid filed competing copyright claims on the work of art. After an initial District Court ruling favored CCNV, the case was taken to the Supreme Court, where Justice Thurgood Marshall wrote the decision in favor of Reid and all independent contractors; the case brought international attention to concerns for the rights of artists to retain creative and intellectual property.

After his landmark case settled, Reid continued to create works of art, holding numerous one-man shows and participating in many group shows.

See how James Earl Reid is related to other HistoryMakers
Click Here To Explore The Archive Today!