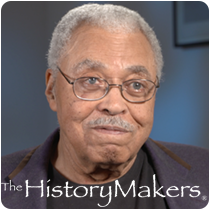 See how James Earl Jones is related to other HistoryMakers

Actor James Earl Jones was born on January 17, 1931 to Robert Earl Jones and Ruth Connolly in Arkabutla, Mississippi. When Jones was five years old, his family moved to Dublin, Michigan. He graduated from Dickson High School in Brethren, Michigan in 1949. In 1953, Jones participated in productions at Manistee Summer Theatre. After serving in the U.S. Army for two years, Jones received his B.A. degree from the University of Michigan in Ann Arbor in 1955.

Following graduation, Jones relocated to New York City where he studied acting at the American Theatre Wing. Jones’ first speaking role on Broadway was as the valet in Sunrise at Campobello in 1958. Then, in 1960, Jones acted in the Shakespeare in Central Park production of Henry V while also playing the lead in the off-Broadway production of The Pretender. Geraldine Lust cast Jones in Jean Genet’s The Blacks in the following year. In 1963, Jones made his feature film debut as Lt. Lothar Zogg in Dr. Strangelove, directed by Stanley Kubrick. In 1964, Joseph Papp cast Jones as Othello for the Shakespeare in Central Park production of Othello. Jones portrayed champion boxer Jack Jefferson in the play The Great White Hope in 1969, and again in the 1970 film adaptation. His leading film performances of the 1970s include The Man (1972), Claudine (1974), The River Niger (1975) and The Bingo Long Traveling All-Stars and Motor Kings (1976). In 1974, Jones portrayed Lennie in Of Mice and Men on Broadway. Jones also voiced the iconic character Darth Vader in the 1977 movie Star Wars, returning to the role in the subsequent sequels, The Empire Strikes Back and Return of the Jedi. Jones portrayed Troy Maxson in the original Broadway production of Fences in 1987. Two years later, he appeared in the movie Field of Dreams, and was cast as the lead character on the television show Gabriel’s Fire. Jones provided the voice for Mufasa in the 1994 animated Disney film The Lion King. He returned to the Broadway stage in 2005, starring in On Golden Pond. He then appeared in Cat on a Hot Tin Roof in 2008, and acted in productions of Driving Miss Daisy alongside Vanessa Redgrave in London in 2011 and Angela Lansbury in Australia in 2013. He also appeared with Cicely Tyson in a 2015 revival of The Gin Game.

Jones won his first Tony Award in 1969 for The Great White Hope. He then received his second Tony Award for his portrayal of Troy Maxson in Fences. In 1991, Jones received Emmy Awards for his roles in Gabriel’s Fire and Heat Wave. In recognition of his fifty plus years in acting, Jones received an Honorary Academy Award in 2011.

James Earl Jones was interviewed by The HistoryMakers on August 10, 2016.

See how James Earl Jones is related to other HistoryMakers
Click Here To Explore The Archive Today!