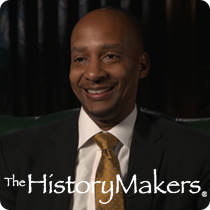 See how James E. Payne is related to other HistoryMakers
Donate Now

Lawyer James E. Payne was born on March 3, 1968 in Port Arthur, Texas to James C. Payne and Jessie Payne. He attended Port Arthur Lincoln High School in Port Arthur, where he played on the basketball team, winning the 1986 UIL Championship game. He then earned his B.S. degree in political science with honors from the University of Houston in 1989. He earned his J.D. degree from the University of Houston Law Center in 1993.

Payne interned for Florida Congressman William Lehman in 1989. In 1993, Payne was hired as an associate lawyer at Vinson & Elkins L.L.P. Wanting to gain more trial experience, he left the firm to join the Provost Umphrey Law Firm, L.L.P. There, Payne practiced products liability, industrial work site accidents, automobile accident, and premises liability law. He was certified in personal injury trial law by the Texas Board of Legal Specialization, and as a civil trial advocate and a pretrial practice advocate by the National Board of Trial Advocacy. In one of his more high profile cases, Matthews Smith et al. v. Star Enterprise et al., Payne argued on behalf of 250 plaintiffs against Texaco’s discriminatory employee practices. The plaintiffs received a $9 million settlement. This case, along with a number of others, allowed Payne to become a certified member of the Million Dollar Advocates Forum. In addition to his legal work, he served as a youth minister at Cathedral of Faith Baptist Church in Beaumont, Texas, where he organized the Sunday school program R.E.A.L. School for Young Adults.

Payne was featured on the “Texas Super Lawyers” list by Thomson Reuters in 2003, continuing to make appearances on the list for many years. He was also named one of their “Top 100: Houston Super Lawyers” in 2013. Payne was featured on the US News and World Report “Best Lawyer” list from 2006 to 2017. He also organized “The Buy 90 Campaign for BOBs (Black Operated Businesses)” in Southeast Texas. A life member of the NAACP and Alpha Phi Alpha Fraternity, Payne served as Grand Sire/national President of the Sigma Pi Phi Fraternity.

James E. Payne was interviewed by The HistoryMakers on December 3, 2016.

See how James E. Payne is related to other HistoryMakers
Donate Now
Click Here To Explore The Archive Today!