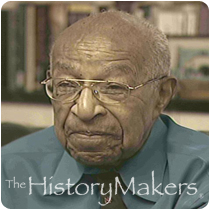 See how James Dumpson is related to other HistoryMakers

International social worker and educator James Russelle Dumpson was born on April 5, 1909 to James and Edythe Dumpson in Philadelphia, Pennsylvania.

Dumpson’s family moved to West Philadelphia where he attended West Philadelphia Boys’ High School. He then attended Chaney Normal School (now Chaney Teachers College) and received a teaching certificate in 1932. He went on to Temple University to receive his B.A. degree in education in 1934. Dumpson taught elementary school for two years before moving to New York City to work for the Children’s Aid Society as a case worker. He then received his M.A. degree in social work from Fordam University and his Ph.D. from the University of Dacca in Ghana.

From 1953 to 1954, Dumpson served as a United Nations Advisor/Chief of Training in Social Welfare to the Government of Pakistan. In 1971, he worked as a consultant in Pakistan, and in 1977, received a fellowship to Pakistan through the United States Department of Health, Education, and Welfare to Pakistan.

In 1959, Dumpson was named Commissioner of Welfare for the City of New York, becoming the only African American welfare commissioner in the country. His appointment also marked the first time that a social worker had held the position. He then returned to New York seven years later to become administrator of the Human Resources Department.

As an advisor to Presidents Kennedy and Johnson, Dumpson served on various advisory commissions, including the Presidents Commission on Narcotics and Drug Abuse. In 1990, Dumpson was appointed to serve as New York City’s Health Service Administrator and Chairman of the Health and Hospitals Corporation. Upon retirement, he continued to teach at Fordham University until 2006.

See how James Dumpson is related to other HistoryMakers
Click Here To Explore The Archive Today!