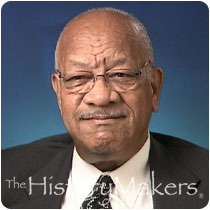 See how James D. Montgomery is related to other HistoryMakers

James Douglas Montgomery was born on February 17, 1932 in Louise, Mississippi to Mildred and James Montgomery. A skilled litigator, Montgomery is renowned for his handling of civil rights cases, as well as criminal, personal injury and medical malpractice cases.

In 1949, Montgomery graduated from Wendell Phillips High School in Chicago, Illinois. After receiving a B.A. from the University of Illinois in Champaign at Urbana, he enrolled in the university's College of Law and earned a J.D. in 1956. Montgomery went to work at the law firm of Rogers, Stayhorn and Harth, becoming a U.S. prosecutor in 1958. Going into private practice, he became a partner in different law firms and founded James D. Montgomery and Associates, Ltd. In the 1960s, his clients included the Blackstone Rangers and the Black Panthers. In 1983, Montgomery made history when he became the corporation counsel for the City of Chicago under Mayor Harold Washington. He was the first and only African American to hold this position. In 2000, Montgomery became a managing partner in the law firm of Cochran, Cherry, Givens, Smith and Montgomery and together with the well-known trial attorney Johnnie L. Cochran, they have successfully handled several high profile cases.

Montgomery has perfected his craft, lecturing throughout the country on trial and litigation techniques. He has spoken before for the National Association of Criminal Defense Lawyers, DePaul University, the Illinois Institute for Continuing Legal Education, Harvard Law School and the University of Chicago. Montgomery has been honored with the Edward H. Wright Award, the Earl Burrus Dickerson Award and the National Bar Association's Hall of Fame Award. In 1999, the Illinois Academy of Lawyers inducted Montgomery as a laureate in the academy, describing him as a man who personifies the "greatness of the legal profession." Montgomery is married to Pauline Montgomery and has six adult children: Linda, James, Michelle, Lisa, Jewel and Jilian. The three oldest are members of the Illinois Bar.

See how James D. Montgomery is related to other HistoryMakers
Click Here To Explore The Archive Today!