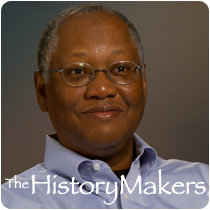 See how James Curry is related to other HistoryMakers

Mathematician James Curry was born in 1948 in Oakland, California. Curry became interested in mathematics at age twelve, after seeing fascinating symbols and equations in a physics book. He was determined to learn calculus and received a lot of support from his high school math teacher. Curry was also curious about computers after working with one that was donated to his high school. In 1976, Curry received with his B.S. degree in mathematics from the University of California, Berkeley. He also attended graduate school the University of California, Berkeley, graduating with his M.S. degree in mathematics in 1976 and his Ph.D. degree I mathematics in 1976.

Upon graduation, Curry was awarded consecutive postdoctoral fellowships to study the Massachusetts Institute of Technology and the National Center for Atmospheric Research in Boulder, Colorado. In 1981, Curry began scientific investigations with the CRAY High Performance Computing System. His research was supported with the Minority Research Initiation grant from the National Science Foundation. He investigated the role of computers in helping people to understand complicated topics like weather monitoring and mathematics theory. Curry’s research focused on developing ways to solve nonlinear equations using a computer. He worked with scientists who study the ocean and atmosphere, such as Warren Washington, and helped them to answer questions about their work using mathematics and computers. In 1990, Curry joined the faculty at the University of Colorado, Boulder as associate professor of applied mathematics. Curry was promoted to full professor of mathematics at the University of Colorado in 1991; and, in 2008, he was appointed associate director of the program in applied mathematics. Curry has also worked as a project officer at the National Science Foundation, where he managed the distribution of federal funding to programs from the Division of Mathematical Science, Applied Mathematics Division.

Curry’s seminal research with the CRAY supercomputer has been widely-published in academic journals including, Communications in Mathematical Physics and Communications in Applied Nonlinear Analysis. In addition to research and writing, Curry has contributed to STEM education via The Curriculum Project, which has been successful in addressing critical issues involving minority participation in mathematics.

James H. Curry was interviewed by The HistoryMakers on January 16, 2013.

See how James Curry is related to other HistoryMakers
Click Here To Explore The Archive Today!