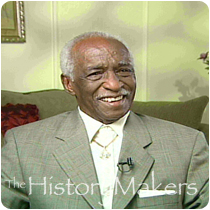 Elementary school teacher and engineer James Collier was born on October 18, 1924 in Jackson, Tennessee to Lucille and James Collier, Sr. Collier’s grandmother ran a boarding house for Pullman porters, and his maternal great grandmother lived to be 111 years old. A retired quality control engineer for Monsanto, Collier was the inventor of the process by which Monsanto sliced and coated silicon chips for electronic information storage. Growing up in Jackson, Tennessee, he attended South Jackson Elementary School in an integrated neighborhood. At segregated Merry High School in Jackson, Collier was an outstanding musician. He sang and played the violin and trombone. Before graduation in 1942, Collier and the members of the choir refused to entertain the white state school superintendent. They let the elaborate intro music play and stood mute.

Drafted into World War II in 1943, Collier was discharged in 1946. He graduated from Jackson’s Lane College with his B.S. degree in social science and music in 1949. Collier also took graduate courses at Saint Louis University in St. Louis, Missouri.

Collier started working for the St. Louis Board of Education in 1950 as a substitute teacher, then as a sixth grade teacher. Also working after hours as a musician and band leader, he played trombone with his group, Jim Collier and the Rhythmaires and promoted acts like Chuck Berry, Eddie Kendall, Archie Burnside, Nancy Wilson, Otis Hightower, Art Blakely, Ernie Wilkins, Jimmy Forrest and Jimmy Smith.

In 1980, Collier invented and patented a silicon slicing process for today’s silicon chips. Monsanto Electronics established a plant to produce the chips in 1963, where Collier experimented and developed the slicing process.

Collier was the founder of Operation Family and works with youth, mentoring and teaching them voice and stage presence. For many years, he produced his own cable television show. The broad range of subjects covered by Collier include the works of Tyler Perry, black land distribution after the Civil War, St. Louis gang culture and an award winning Black History Month program. Collier also published a book of his poetry and was developing his talent as a painter.