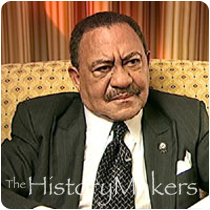 See how James Cheek is related to other HistoryMakers

James Edward Cheek, president emeritus of Howard University, was born in Roanoke Rapids, North Carolina, on December 4, 1932. Despite severe eye cataracts, Cheek was an honor student at Washington Street Grammar School. He graduated from Immanuel Lutheran College with a secondary diploma in 1950 and served as a member of the United States Air Force in Korea in 1951. Earning a B.A. in sociology and history from Shaw University in 1955, Cheek received a master's of divinity from Colgate Rochester University in 1958 and a Ph.D. from Drew University in 1962. During this period he was honored with a Colgate Rochester Fellowship, a Rockefeller Doctoral Fellowship and a Lily Foundation Fellowship.

Cheek was a professor of New Testament Theology at Virginia Union University when he was named president of Shaw University in 1963, at the age of thirty. In 1968, he was appointed president of Howard University. During Cheek's twenty-year tenure at Howard, the student population increased by 3,500 and the number of schools, colleges, research programs, full-time faculty and Ph.D. programs increased dramatically. Howard's budget increased from $43 million to $417 million as the federal appropriation went from $29 million to $178 million. He was named Washingtonian of the Year in 1980 and in 1983, while still serving as president of Howard, Cheek was awarded the nation's highest civilian honor, the Presidential Medal of Freedom.

The recipient of hundreds of awards and nineteen honorary degrees, Cheek served as a board member of several colleges and universities including the University of Miami, Drew University, Colgate Rochester University, New York Institute of Technology, Benedict College, Florida Memorial College, Fisk University and Howard University. His presidential appointments included the Board of Foreign Scholarships, National Advisory Council to the Peace Corps, UNESCO, Commission on Selection of White House Fellows and the President's Board of Advisors on Historically Black Colleges and Universities. Cheek and his wife, Celestine, were parents of a son and a daughter and had two grandchildren.

See how James Cheek is related to other HistoryMakers
Click Here To Explore The Archive Today!