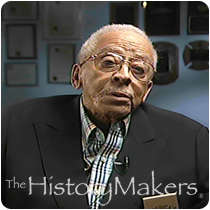 Favorite Color:
Black
Favorite Time of Year:
Summer
Favorite Vacation Spot:
Hawaii
Favorite Quote:
The More You Learn, The More You Can Do.

Favorite Color:
Black
Favorite Time of Year:
Summer
Favorite Vacation Spot:
Hawaii
Favorite Quote:
The More You Learn, The More You Can Do.

See how James Cameron is related to other HistoryMakers
Donate Now

James Cameron, founder of America’s Black Holocaust Museum, was born February 23, 1914, in LaCrosse, Wisconsin, to James Herbert Cameron and Vera Carter. When Cameron’s father left the family the family moved to Birmingham, Alabama, and later to Kokomo, Indiana. When his mother remarried, Cameron resettled in Marion, Indiana. Cameron attended DaPayne School through the 8th grade where he was given the name Apples because he carried apples in his pockets for lunch. On the night of August 7, 1930, Cameron’s friends Abe Smith, nineteen, and Tommy Shipp, eighteen, tried to hold up a white couple at the local Lovers’ Lane. The Grant County Sheriff arrested Cameron charging him and his friends with murder; the Ku Klux Klan stormed the jail and tried to lynch the trio. During the altercation, Cameron passed out; his two friends were lynched but Cameron’s life was spared.

Although Madame C.J. Walker sent him two NAACP lawyers from Indianapolis, Cameron was convicted in his 1931 trial as an accessory. Paroled in 1935, Cameron moved to Detroit, Michigan, where he worked for Stroh’s Brewing Company and attended Wayne State University. In Madison, Wisconsin, Cameron founded the local branch of the NAACP and founded two more chapters in Muncie and South Bend, Indiana.

In 1983, Cameron mortgaged his house in order to publish his memoir, A Time of Terror. In 1988, with the assistance of philanthropist Daniel Bader, Cameron founded America’s Black Holocaust Museum, a non-profit devoted to preserving the history of lynching in the United States and the struggle to eradicate it. Located in a twelve thousand square-foot gym purchased for one dollar from the City of Milwaukee, Wisconsin, the museum contains artifacts from slavery, stereotypes, lynching postcards, and photographs. America’s Black Holocaust Museum is visited annually by thousands of school children. Cameron appeared on ABC television’s Nightline, and scores of other television programs. In 1991, Cameron was officially pardoned by the State of Indiana.

See how James Cameron is related to other HistoryMakers
Donate Now
Click Here To Explore The Archive Today!