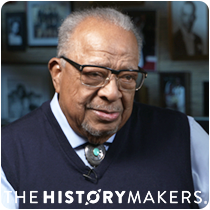 Hotel executive James “Bud” Ward was born on June 4, 1925 in Worcester, Massachusetts to James Ward, Sr. and Pauline Walker. Ward graduated from North High School in 1943, and enlisted in the U.S. Air Force but ultimately served in the U.S. Navy for four years. Ward briefly studied at Howard University before transferring to Cornell University, where he became the first African American graduate of the school’s hotel administration program in 1952.

Upon graduating from Cornell University, Ward returned to Washington, D.C., and worked as a restaurant manager at Howard University. Shortly after, Ward was hired as the manager of the Book of T Motel in Miami, Florida. He then worked as a waiter at a local restaurant and as a desk night clerk at the Carver Hotel. Ward also served as the manager of the Lord Calvert Hotel in Miami. In 1958, Ward moved back to Washington, D.C. and joined a marketing and public relations consulting firm. In 1962, Ward founded Special-Market Resources, a consulting company that specialized in African American consumerism research and marketing. In 1967, Ward was hired by the Marriott Corporation to assess the minority employment practices at the company. He worked as a consultant for Marriott until 1970, when he joined the company as vice president of management and training development, making him the first African American to serve as vice president of a major hotel chain. Ward worked for the Marriott Corporation for almost twenty years, and played an instrumental role in expanding the hotel division, including working with the team that developed the Courtyard by Marriott Hotels. In 1986, he left Marriott to found Symbiont, Inc., an information technology company. James "Bud" Ward passed away on Wednesday, July 31, 2019.

In 1966, Ward co-published, Go-Guide to Pleasant Travel, a travel and leisure magazine for African Americans that provided lodging information during the segregation era. Ward has also been honored for his contribution to the African American community with his service as the first black vice president of a major hotel chain. In 2006, he was awarded the Jackie Robinson Robie Lifetime Achievement Award. The same year, Ward was given a certificate of appreciation by the District of Columbia Superior Court.

Ward and his wife, Eulah, had three children: Forrest, Charles, and Sterling, and three grandchildren.

Ward was interviewed by The HistoryMakers on March 22, 2018.