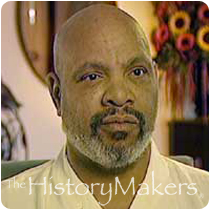 Favorite Color:
Blue
Favorite Food:
All Food
Favorite Time of Year:
Christmas
Favorite Vacation Spot:
Oceans
Favorite Quote:
I will never be alone because I have my ancestors with me and I'm the sole reason for their existence.

Favorite Color:
Blue
Favorite Food:
All Food
Favorite Time of Year:
Christmas
Favorite Vacation Spot:
Oceans
Favorite Quote:
I will never be alone because I have my ancestors with me and I'm the sole reason for their existence.

See how James Avery is related to other HistoryMakers
Donate Now

Born on November 27, 1948, in Atlantic City, New Jersey, James Avery left his hometown after high school to serve in the U.S. Navy in Vietnam from 1968 to 1969. Avery then settled in San Diego, where he wrote poetry and television scripts, winning an Emmy Award for his production of Ameda Speaks: Poet James Avery. Avery also received a scholarship from the University of California at San Diego, where he obtained his B.A. degree in drama and literature in 1978. Avery was awarded an honorary doctorate from Virginia State University in 1996.

Throughout his career, spanning over thirty years, as a writer working with a collective group in San Diego, Avery also worked as an actor in television, film, and theater productions. Avery's first acting part came in the role of God in the play JB in 1971 at San Diego Community College. After performing in his first acting role, Avery went on to star in the UPN comedy series Sparks from 1996 to 1998; and had recurring roles on The Legend of Tarzan, Showtime's Soul Food, and The Division on the Lifetime Network. Avery was best known for his role as the uncle of Will Smith's character on the popular sitcom, The Fresh Prince of Bel Air. Avery also played roles as judges on L.A. Law, Night Court, and Murder One. Avery's movie credits included Dancing in September; Dr. Dolittle 2; and License to Drive. Avery performed on stage at the Oregon Shakespeare Festival, playing the lead in Othello, among other roles; at the Back Alley and Met Theatres in Los Angeles; and in other productions across the country.

Avery. a seasoned traveler, indulged his passion acting as host of the critically acclaimed PBS series Going Places; the program, once public television's highest-rated series, enabled viewers to see different places in the world through Avery's eyes. As host of Going Places, Avery had the opportunity to visit such diverse locales as Turkey, Bali, Madrid, and Yellowstone National Park.

Avery was interviewed by The HistoryMakers on June 24, 2003.

See how James Avery is related to other HistoryMakers
Donate Now
Click Here To Explore The Archive Today!