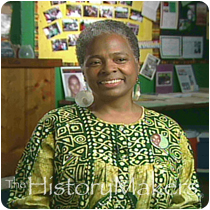 See how Jamala Rogers is related to other HistoryMakers
Donate Now

Newspaper columnist and community organizer, Jamala Rogers was born Terry Massey on October 11, 1950 in Kansas City, Missouri to Lollie Massey and Bennett Woodward Massey. Rogers attended Phillips, Ladd and Moore Elementary Schools and graduated from Central High School in 1968. An activist at Tarkio College, Rogers was a leader of the black student organization. She also tried to join the Kansas City chapter of the Black Panther Party during the time that its leader, Pete O’Neal, was leaving the country. After earning her B.A. degree in education in 1971, Rogers relocated to St. Louis, Missouri.

Rogers helped to found the St. Louis Chapter of the Congress of African People (CAP) under the leadership of Amiri Baraka in the 1970s. There, along with Haki Madhubuti, Kalamu Ya Salaam, Jitu Weusi and others, Rogers practiced a version of Maulana Karenga’s black nationalist Kawaida Theory. She was also involved in the African Liberation Support Committee and the National Black Political Assembly. In 1980, Rogers joined Herbert Daughtry, Conrad Worrill and other black activists to form the Black United Front. The Organization for Black Struggle (OBS) was founded in St. Louis, Missouri in 1980 by Rogers and other community activists, students and union organizers to help the black working class and extol the principles of Black Power. OBS programs include community civic, youth, education and cultural arts activities from the African oriented Rowan Community Center.

In 1993, Rogers was appointed director of the City of St. Louis’ Office of Youth Development by Mayor Freeman Bosley, Jr. and fostered innovative approaches to addressing youth services . She served in that capacity until 2001. During this period, Rogers also served as chairperson of the St. Louis Black Leadership Roundtable. In 1998, Rogers joined with Angela Davis, Bill Fletcher and 2,000 other activists to form the Black Radical Congress (BRC) in Chicago. The BRC is a grassroots network focusing on civil and human rights. Rogers has served in a number of leadership capacities with the BRC, including as a coordinating committee member and as national conference coordinator. In addition to being chairperson of OBS, she is co-chair of the Coalition Against Police Crimes and Repression (CAPCR) and sits on numerous boards of youth and education oriented agencies. Rogers is a prolific contributor to websites and blogs and is also a featured contributing writer for The St. Louis American and an editorial board member of the Black Commentator. Her writing focuses on issues like Hurricane Katrina, the Jenna Six, police brutality and the environment. She is married to veteran civil rights activist Percy Green II.

Rogers was interviewed by The HistoryMakers on October 16, 2007.

See how Jamala Rogers is related to other HistoryMakers
Donate Now
Click Here To Explore The Archive Today!