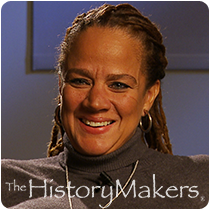 See how Jacquie Jones is related to other HistoryMakers
Donate Now

Producer, writer and director Jacquie Jones was born on April 28, 1965 in Washington, D.C. to Humphrey and Claire Antoine Jones. She grew up in Memphis, Tennessee. In 1987, Jones graduated with her B.A. degree in English, with a minor in African American Studies, from Howard University. She went on to receive her M.A. degree in documentary filmmaking from Stanford University in 1995.

Upon graduation from Stanford University, Jones was hired as a producer for the Public Broadcasting Station, WGBH, in Boston. In 1999, she was appointed senior vice president of ROJA Productions, where she worked until 2003. From 2001 to 2003, Jones updated all existing media, as well as created new installations for the collection of the National Civil Rights Museum in Memphis, Tennessee. Then, in 2005, she was hired as the executive director of the National Black Programming Consortium, where she established herself as a leader in the evolving digital media landscape with projects including the Katrina Project, the Ford Foundation-funded Masculinity Project, and NMI: Africa. Jones also founded the New Media Institute in 2006, and the Public Media Corps in 2009.

Jones produced Africans in America, Matters of Race and 180 Days: A Year Inside an American High School for PBS, Behind Closed Doors: Sex in the 20th Century for Showtime, and The World Before Us for the History Channel. Her other film credits included acting as an executive producer on Afropop: The Ultimate Cultural Exchange, Black Folk Don't, and multiple episodes of the television series Independent Lens and P.O.V..

Jones also published writings in numerous anthologies and periodicals, including the anthologies Black Popular Culture and Picturing Us: African American Identity in Photography, as well as The Huffington Post. From 1989 until 1993, she was the editor of Black Film Review, a quarterly journal about African Diaspora film making. Jones was awarded a Peabody Award and was selected as a Revson Fellow at Columbia University. She was a scholar-in-residence at the American University, and served on the boards of directors of the Integrated Media Association, California Newsreel, the Committee on Black Performing Arts at Stanford University, and Grantmakers in Film and Electronic Media. Jones also served on the community advisory board of WHUT-TV at Howard University.

See how Jacquie Jones is related to other HistoryMakers
Donate Now
Click Here To Explore The Archive Today!