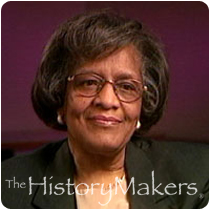 See how Jacquelyne D. Grimshaw is related to other HistoryMakers
Donate Now

Activist and public policy advocate Jacquelyne D. Grimshaw was born in Macon, Georgia, on May 15, 1942, to James Lane and Lovia Lane-Thorton. She graduated from Loretto Academy Catholic High School in Chicago in 1960 and earned a B.S. in biology from Marquette University in 1965. In 1967, Grimshaw received an education certificate from Chicago Teachers College.

After early work in the media industry, Grimshaw's career path turned to public policy when she joined the Illinois Department of Labor and Personnel. She was then employed by the U.S. Department of Health and Human Services as a program officer for the Indiana Work Incentive Program and Head Start.

Grimshaw worked for the campaign of Chicago Mayor Harold Washington and, in 1984, she joined the Mayor's Office of Intergovernmental Affairs. In 1986, Washington named her his top legislative aide. There she played a critical role in pushing forth the mayor's legislative agenda. After Washington's untimely death, Grimshaw went on to serve as deputy city treasurer for economic development. In 1992, she joined the Center for Neighborhood Technology as its vice president of policy, transportation and community development.

Over the years, Grimshaw has had numerous civic and professional affiliations, including membership in the Surface Transportation Policy Project, the Transportation Research Board's committees on Environmental Justice and Women's Issues in Transportation, the American Public Transport Association, Congress for New Urbanism, Smart Grown America, Renew America/Renew the Earth, and the Center for Clean Air Policy.

See how Jacquelyne D. Grimshaw is related to other HistoryMakers
Donate Now
Click Here To Explore The Archive Today!