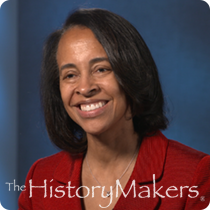 See how Jacquelyn E. Stone is related to other HistoryMakers

Lawyer Jacquelyn E. Stone was born on January 7, 1958 in Williamsburg, Virginia to William Thomas and Sara Elizabeth Stone. Stone attended the University of Virginia in Charlottesville, Virginia, where she earned her B.A. degree in American government in 1980. She went on to earn her J.D. degree from Harvard Law School in 1985.

From 1980 to 1982, Stone worked as a legislative assistant to U.S. Representative Robert H. Michel. While at Harvard, she was a member of the Harvard Student Bar Association and Harvard Law Forum, and was selected as a Dunster House Pre-Law Advisor. After obtaining her J.D. degree, Stone was hired as an associate at McGuireWoods LLP in Richmond, Virginia, where she focused on business immigration law, regulatory matters and government relations . When she was elected partner at McGuireWoods LLP in 1994, Stone became the first African American woman partner in a major law firm in Virginia. She later became the first African American to serve on McGuireWoods’ Board of Partners. Stone was firmwide Hiring Partner for over twenty years and also created the firm’s Diversity & Inclusion Committee, which she later chaired.

Stone was active in the American Bar Association and was selected as a Fellow of the American Bar Foundation. She also served on the executive committee of the Young Lawyers Section of the Virginia Bar Association and chaired its membership committee. From 1995 to 1998, she was a faculty member for the mandatory Virginia State Bar Harry L. Carrico Professionalism Course. She was also a member of the American Immigration Lawyers Association, and served on the Executive Committee of the Old Dominion Bar Association. Stone has served on multiple organizations’ boards, including Just the Beginning – A Pipeline Organization, Partnership for the Future, The Richmond Forum, Richmond CenterStage Foundation, Venture Richmond, Arts Council of Richmond, Greater Richmond Chamber of Commerce Foundation, Junior Achievement, Leadership Metro Richmond, Local Initiatives Support Corporation, Sorensen Institute for Political Leadership, Richmond Eye and Ear Hospital, Richmond Retirement System, Valentine Museum, United Way and Lewis Ginter Botanical Garden. She was appointed by the Governor of Virginia to the Virginia Commonwealth University Board of Visitors, VCU Health System Board of Directors, Science Museum of Virginia, State Council of Higher Education for Virginia, State Commission on Population Growth and Development, State Council on Local Debt, and Virginia Commission on Competitive and Equitable Tax Policy.

Stone received numerous awards for her work, including the Outstanding Women Award from the YWCA in 2000, and the Themis Award from DuPont Women's Lawyer Network and the Women of Achievement Award from Metropolitan Richmond Women's Bar Association, both in 2005. Stone was also inducted to the Virginia Law Foundation 2010 Class of Fellows. In 2018, Stone was one of only six women to receive a National Women in Law Lifetime Achievement Award from Corporate Counsel and InsideCounsel, leading ALM publications.

Stone and her husband, B. Keith Fulton, have two children: Joshua and Terrell.

Jacquelyn E. Stone was interviewed by The HistoryMakers on December 5, 2016.

See how Jacquelyn E. Stone is related to other HistoryMakers
Click Here To Explore The Archive Today!