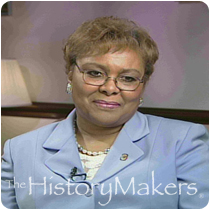 Therapist, educator and government administrator Jacqueline Finney Brown was born on September 4, 1944 in Baltimore, Maryland. As a child, Brown lived with her mother and step-father. The home was a center-piece of Baltimore black society. The family received frequent guests including doctors, lawyers, teachers and prominent entertainers. A young Leslie Uggams practiced singing there, and Duke Ellington, Thurgood Marshall and the Fashion Fair models all attended parties inside Brown’s childhood home. In elementary school, Brown attended Baltimore’s segregated schools, but in 1961, however, she graduated from Western High School, a predominantly white school where she was elected vice president of her senior class and was active in theater.

In 1961, Brown entered Howard University, where she pledged Delta Sigma Theta Sorority. She then transferred to the University of Cincinnati and graduated Phi Beta Kappa in 1967 with her B.A. degree in sociology, psychology and social welfare. Brown received her M.A. degree in guidance and counseling from Bowie State College and her Ph.D. in human development from the University of Maryland. Brown worked as tenured professor in counseling psychology at Bowie State University. Not only is she the former chairperson of the Maryland State Board of Examiners for Professional Counselors, she was also a practicing therapist with her own mental health, counseling and consulting firm.

Brown then served as Director of Academic Support and Director of Reform for the Howard County, Maryland Public School System. She also served on the Superintendent’s Executive Cabinet and directed Family and Community Academic Involvement Services. In 2002, Brown became chief administrative officer for Prince George’s County, Maryland, becoming the first woman to hold this position. In 2006, Brown was elected president of the Metropolitan Washington Council of Governments Corporation. She was later named executive director of Prince George’s African American Museum and Cultural Center.

Brown was interviewed by The HistoryMakers on April 26, 2007.

See how Jacqueline Finney Brown is related to other HistoryMakers
Donate Now
Click Here To Explore The Archive Today!