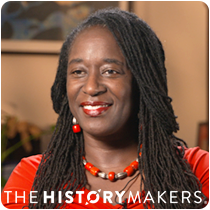 Favorite Color:
Variations of Red
Favorite Food:
Pan-African Cuisine
Favorite Time of Year:
Winter In California
Favorite Vacation Spot:
No Favorite Because I Love The World
Favorite Quote:
I Am Because You Are

Favorite Color:
Variations of Red
Favorite Food:
Pan-African Cuisine
Favorite Time of Year:
Winter In California
Favorite Vacation Spot:
No Favorite Because I Love The World
Favorite Quote:
I Am Because You Are

See how Jacqueline Copeland is related to other HistoryMakers
Donate Now

From 1991 to 1995, Copeland worked as the program vice president for The Philadelphia Foundation. In 2000, she was appointed the first national managing director and vice president of Philanthropic Services at U.S. Bank Private Client Group. In 2006, she founded Copeland Carson & Associates, an international community investment practice, specializing in support to nonprofits, foundations, and social entrepreneurs. She has worked with the Ford Foundation, McKnight Foundation, U.S. Department of HUD, PEW and Global Fund for Women. In 2008, Copeland also conducted the initial research and program design for the My Brothers Keeper project, later adopted by the Obama Administration and Foundation as a signature initiative.

Then, in 2011, Copeland founded the Pan-African Women's Philanthropy Network (PAWPNet). She also founded Black Philanthropy Month, officially held in August and recognized by the United Nations. Additionally, in 2011, Copeland became the first executive director at the African Women’s Development Fund USA. In 2015, Copeland was named chief operations officer at Catholic Charities of Santa Clara County (CCSCC).  In 2017, Copeland led the CCSCC team that collaborated with tech start-up, Senior Growth, to create an award-winning e-health application, MyWellBeing.  As of August 2018, Copeland became chief operating officer of the Anita Borg Institute for Women and Technology, a social enterprise promoting diverse women’s leadership in technology throughout the U.S. and worldwide.

In 2004 Copeland wrote her first book titled Creating Africa in America: Translocal Identity in an Emerging World City. In 2012 she co-authored Applying Anthropology in the Global Village with Christina Wasson and Mary Butler.  Her Evaluation Anthropology, co-authored with Mary Butler in 2005, is recognized as helping to create a new subfield in cross-cultural evaluation.  Noted for documenting African diaspora giving, in 2014, she published African Immigrant Innovations in 21st Century Giving with co-authors Mojubaolu Olufunke Okome and Una Okonkwo Osili.

Since 2011, Copeland has been a featured Huffington Post blogger, writing about black philanthropy, women’s issues, technology and futurism. Copeland was a Bush Foundation Fellow and in 2013, she received the Hero for Health Award, awarded for her dedication and commitment to the social justice field and outstanding achievements in the areas of leadership and research. She is a sought after keynote speaker and trainer on multicultural issues in philanthropy, health, evaluation, technology and human rights.

Jacqueline Copeland was interviewed by The HistoryMakers on November 30, 2017.

See how Jacqueline Copeland is related to other HistoryMakers
Donate Now