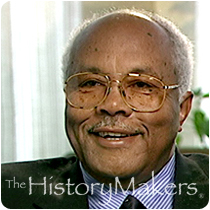 See how Jacoby Dickens is related to other HistoryMakers
Donate Now

An innovative and successful entrepreneur, Jacoby Dickens was born in Panama City, Florida, in 1931. Though Jacoby's father had to leave school at an early age to work on the family farm, he emphasized the importance of education. Early in his childhood, Dickens' family moved to Chicago's South Side, where he attended school.

After graduation from Wendell Phillips High School, Dickens went into business as a real estate developer in the same South Side neighborhoods where he was raised. There he was able to purchase, renovate and lease apartment buildings in key areas of the city during the peak of the Northern Migration. At the height of this enterprise, Dickens managed more than 100 apartments. By the time he sold his real estate holdings in 1971, Dickens had acquired enough capital to purchase several bowling alleys in Chicago. While running two bowling alleys, Dickens was invited to join the board of Seaway National Bank, one of the largest African American-owned financial institutions in the country. Dickens joined Seaway National in 1979 as vice chairman and became chairman in 1983.

As chairman, Dickens created firm ties between Seaway and its surrounding community. Dickens believes the bank shares responsibility for the financial health of the community, an urban neighborhood of moderate and low-income residents. As such, the institution has tailored itself to fit the economic circumstances of its surrounding neighborhoods, promoting the growth of new businesses through loans, outreach and community development programs.

Dickens has distinguished himself as much for his philanthropic efforts as for his entrepreneurial successes. In addition to the community outreach programs developed through Seaway, Dickens has designed a loan and scholarship program at DePaul University named in his honor. As a director of Chicago State University, Dickens has donated more than $1 million to the institution. On December 7, 1995, the Chicago State University Physical Education and Athletics Building was renamed the Jacoby D. Dickens Physical Education and Athletics Center in honor of the esteemed benefactor.

See how Jacoby Dickens is related to other HistoryMakers
Donate Now
Click Here To Explore The Archive Today! 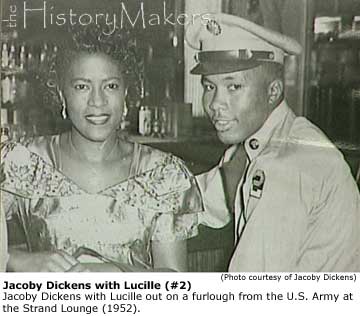