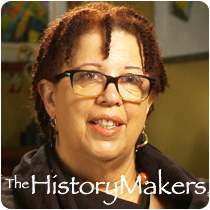 See how Jackie Trescott is related to other HistoryMakers

Journalist Jacqueline E. Trescott was born on January 2, 1947 in Jersey City, New Jersey to Alfred P. and Adelaide C. Miller Trescott. In 1964, Trescott enrolled at St. Bonaventure University, and was mentored by Dr. Russell Jandoli. As a student, she interviewed Levi Stubbs of the Four Tops and interned at the The Newark Evening News when the urban uprisings of 1967 were raging. Trescott graduated from St. Bonaventure University in 1968, earning her B.A. degree in journalism.

In June 1970, she joined The Washington Star as a staff reporter. Her assignments were primarily for the Portfolio section, covering cultural personalities and events. From 1976 to June 2012, Trescott worked for The Washington Post, reporting for its award-winning Style Section. Her assignments included political and celebrity profiles, National Public Radio and the local radio stations, and arts events. Beginning in 1992, Trescott became the principal arts news reporter, covering Washington’s museums, performing arts centers and theaters. She coordinated the sprawling beat and raised the national profile of the Post coverage. The stories ranged from the attacks on the National Endowment for the Arts, to the rise of arts facilities as economic engines for their communities to the construction of the National Museum of the American Indian. Coverage included fund-raising to administrative changes to investigations of management and building conditions. The Virginia Press Association cited Trescott and James Grimaldi for their reporting in 2007. The use of the Freedom of Information Act by Trescott and Grimaldi in reviewing records at the Smithsonian was a finalist in 2009 in the Investigative Reporters and Editors, Inc. competition.

In her last two years at the Post Trescott helped create the Style Blog – originally called the Arts Post – which combined arts news and culture. The blog has also served as a destination for features on the dedication of the Martin L. King Memorial – Trescott posted a month of civil rights songs to salute the occasion. In her four decades, Trescott has often interviewed musical and literary personalities, who helped define their craft: Toni Morrison, Stevie Wonder, Quincy Jones, Chita Rivera, Denzel Washington, Oprah Winfrey and Alice Walker.

Jacqueline E. Trescott was interviewed by The HistoryMakers on August 28, 2012.

See how Jackie Trescott is related to other HistoryMakers
Click Here To Explore The Archive Today!