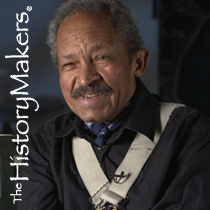 See how Jack Whitten is related to other HistoryMakers

Visual artist Jack Whitten was born on December 5, 1939 in Bessemer, Alabama to Annie B. Cross Whitten and Mose Whitten. He was a pre-med student at Tuskegee Institute before leaving the university in 1959. He then studied art at Southern University in Baton Rouge briefly, before moving to New York City and enrolling at The Cooper Union for the Advancement of Science and Art in 1960, where he earned his B.F.A. degree.

In New York, Whitten became influenced by artists such as Willem de Kooning and Norman Lewis, as well as jazz musicians such as John Coltrane and Miles Davis. Whitten had his first group exhibition in 1965 at Allan Stone Gallery in New York, which also hosted his first solo exhibition in 1968. In the late 1960s, he became an art professor at The Cooper Union and School of Visual Arts. He later taught at Manhattan Community College. Beginning in the 1970s, Whitten broke away from abstract expressionist influences and began to experiment with tools he created to apply paint to canvas, such as a twelve foot rake that he called the “developer.” In 1974, he participated in a solo exhibition at the Whitney Museum of American Art. In 1983, a solo exhibition at the Studio Museum in Harlem celebrated his paintings from 1970 to 1980. In the 1980s, Whitten became interested in using paint as the base of a collage; and in the 1990s and the 2000s, he experimented with the casting of acrylic paint from molds and the construction of paintings as mosaics made from acrylic tesserae. His work was installed in the permanent collections of the Museum of Modern Art and the Metropolitan Museum of Art, among others. His work was also featured in a fifty year retrospective exhibition in 2014. With Hauser & Wirth and Zeno X Gallery, Antwerp as his representation, Whitten has shown his work at the Museum of Contemporary Art, San Diego, Savannah College of Art and Design, Zeno X Gallery in Antwerp, Belgium, Art Basel in Switzerland, Walker Art Center, Alexander Gray Associates, and Atlanta Contemporary Art Center.

Whitten has been awarded the 2015 National Medal of Arts, John Hay Whitney Fellowship, an Individual Artist’s Fellowship from the National Endowments for the Arts, and the Guggenheim Fellowship. He was awarded an honorary doctorate from the San Francisco Art Institute and Brandeis University in 2014 and 2016, respectively.

See how Jack Whitten is related to other HistoryMakers
Click Here To Explore The Archive Today!