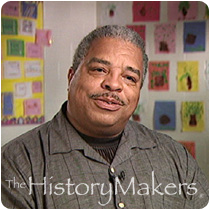 See how Jack Hampton is related to other HistoryMakers
Donate Now

Artisan Jack Hampton was born in Chicago, Illinois on January 18, 1947. Early on, he proved himself to be a good student in math and sciences, and after graduating from Englewood High School in 1964, Hampton enrolled in the Chicago Technical College, where he studied drafting and architectural sciences. He later transferred and earned his B.S. in architectural engineering and design from the Illinois Institute of Technology.

Hampton joined the United States Army in 1968, where he was a public information officer and an armorer. After his honorable discharge, he stayed in Europe and traveled for a short time before returning to his hometown of Chicago. After his return home, Hampton was hired by Sears Roebuck & Company as a salesman, where he remained until 1974. That year, he was named executive vice president of sales and marketing for Montgomery Wards, a position he kept for the next ten years.

While in Germany in 1970, Hampton worked briefly at Scholmyer Glass Company, and did work in Switzerland, France and the United Kingdom, as well. Hampton has continued with his stained glass creations, and in 1985 he put himself full-time into his artistic endeavors and his company, A to Z Stained Glass. To date, Hampton has created more than 10,000 original pieces, and has repaired countless more. His works can be seen in more than fifty churches throughout Europe and the United States, as well as in private collections.

Hampton was interviewed by The HistoryMakers on July 21, 2004.

See how Jack Hampton is related to other HistoryMakers
Donate Now
Click Here To Explore The Archive Today!