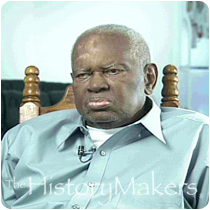 "I'll Let No One Separate Me From The Grace Of God."

Postal worker and Georgia NAACP president James Windel Lemon was born on November 9, 1919 in Locust Grove, Georgia to Maggie Richie and James E. Lemon. Both of his parents were sharecroppers; as a result, Lemon and his five siblings worked the farm at a very young age. Lemon was accidentally shot by hunters in November of 1925, and lost his left eye. In 1935, his father went to work in the cotton mills when the dust bowl impacted their farming community. Lemon attended Shoal Creek Elementary School and graduated from Henry County Training School in McDonough, Georgia in 1939.

After graduation, Lemon went to Atlanta and worked for his Uncle George in a pressing plant. Soon after, under the National Youth Administration, he attended Forsyth State Teacher’s College in Forsyth, Georgia, where he studied to be a plumber. The cost to attend the school was ten dollars per month. In 1940, while attending the school, he met his future wife and they got married that same year. After leaving school, Lemon tried to get work in Detroit, Michigan, but was unsuccessful. He returned home to live with his parents in Georgia.

During the 1940s, Lemon became the founder and youngest chapter president of the Henry County NAACP, and found himself under regular threat by the Ku Klux Klan. He was actively involved in advocating for an improved education system in Henry County and successfully achieved the group’s goal of better training for teachers in African American schools. Lemon was also heavily involved in fighting for the rights of African American farmers and helped them purchase land through the Federal Home Loans Administration. In addition, Lemon was instrumental in persuading then-Georgia Governor Herman Talmadge in enacting civil rights legislation during the 1970s. During this time, Lemon worked for the U.S. military at an Army Depot credit union, where he remained until 1945.

Lemon next worked for the mail department at the railroad at Terminal Station in Atlanta, a branch of the United States Post Office. He worked there for twenty-one years, after which he left to work directly for the U.S. Post Office, where he remained for another twenty years. Lemon was involved in supporting Jimmy Carter’s run for the U.S. Presidency in the mid-1970s. Lemon retired from the U.S. Postal Service as a clerk and mail handler.

Lemon is the devoted husband of Mrs. Gladys Lemon, his wife of sixty-one years, the father of three sons, James, Jr., Kenneth and Wayman.

Lemon was interviewed by The HistoryMakers on December 11, 2006.