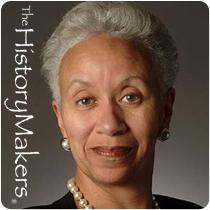 See how J. Veronica Biggins is related to other HistoryMakers
Donate Now

Corporate executive and presidential appointee J. Veronica Biggins was born on October 19, 1946 in Belmont, North Carolina to Jacqueline McDonald and university professor Andrew Williams. Her father, also a tennis professional, and a family friend funded several of the early tennis ventures of tennis legend, Arthur Ashe. Biggins and her two brothers attended Catholic schools during their formative years. They also spent two years of elementary school in Indonesia. Biggins went on to receive her B.S. degree from Spelman College and her M.A. degree from Georgia State University.

Biggins entered the business world as a management trainee at NationsBank, formerly The Citizens Southern Bank and now Bank of America. She received several promotions and was one of the highest-ranking females in banking in the country when she left the industry as Executive Vice President for Corporate Community Relations. In 1994, Biggins became Assistant to the President of the United States and Director of Presidential Personnel under William Jefferson Clinton. Her responsibilities included the placement of agency heads, ambassadors and members of the presidential boards and commissions. During the fourth world conference on women of the United Nations in 1995, Biggins served as Vice Chairman of the United States Delegation in Beijing, China. She later served as a Senior Partner at Heidrick & Struggles, an international executive consulting firm, and then as Managing Partner of Diversified Search in Atlanta, Georgia.

Biggins has served on the boards of AirTran Airways, Southwest Airlines, Avnet, NDC Health, the Georgia Research Alliance, the Woodruff Arts Center, the Atlanta Life Insurance Company, Downtown Atlanta Rotary and the International Aids Fund. She was also a fellow of Harvard University’s Advanced Leadership Initiative, and has served as Chairman of the Czech Slovak American Enterprise Fund and the Savannah College of Art and Design’s Global Board of Visitors. Biggins received a Points of Light award from President George Walker Bush and has been named to the Georgia State University Business Hall of Fame.

See how J. Veronica Biggins is related to other HistoryMakers
Donate Now
Click Here To Explore The Archive Today!